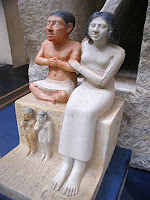 When I came to Cairo for the first time, after the Pyramids and the Sphinx my priority was to visit the Archaeological Museum. The greatest attraction for me was neither the mummy collection nor even the gold headdress of Tutankhamun, but rather the prospect of seeing for myself the 4,500 year old statue of a dwarf, Seneb, one of the first in human history to be known by name.

Egypt, described as “the land where all children are reared” was one of the better place in the ancient world to have a disability, particularly in contrast to Greece and Rome, where disabled children were often exposed on hillsides to die. Amenemope (2000 BCE) promulgated early anti-discrimination legislation: "Mock not the blind nor deride the dwarf nor block the cripple's path: don't tease a man made ill by a god, nor make outcry when he blunders".

Dwarfs in particular had high status. Cabinets in the Archaeological Museum are stuffed with hundreds of amulets of the god Bes, seemingly achondroplasic (restricted growth) in appearance and often wearing a lion-skin cape. Bes defended against snakes, was patron and protector of pregnant women and of children, and although not formally worshipped was often invoked in rituals and displayed around the home. I also saw the granite sarcophagus of Djehe, who danced at the Serapeum at the day of the burial of Apis, the sacred bull: he is depicted in profile, naked and with his head shaved, and with the unmistakeable physique of someone with achondroplasia.

Seneb, whose name means “healthy” likely came from an upper class family, and had a successful career as a civil servant. This is known from inscriptions in his tomb in Giza, which list his many official titles and roles – including “overseer of weaving” and “overseer of dwarfs” as well as “beloved of the king”. He also served in the funerary cults of the kings Khufu and Djedefre, the Pyramid builders. Seneb was married to Senites, who was a priestess and was of average size: they had a son and two daughters, none of whom seems to have had the condition. Seneb owned thousands of cattle, as well as two pet dogs. Images reveal that furniture was adapted to suit him, such as low stools and also show him on his boat on the Nile.

The painted limestone statue in the Archeological Museum was found in a stone box in the tomb. It pictures Seneb and his wife seated side by side. He is cross-legged in the pose of a scribe, wearing a loin cloth, with his arms held in front of his chest. His wife has her right arm around her husband’s shoulders, and her other hand holds his left arm. She wears a long straight dress and a wig, although you can see her natural hairline underneath. Seneb’s short legs allows a space for smaller images of two of the children to be fitted in front and underneath him. Although there are other statues in the museum of couples, and of mothers and children, this is the only family group on display. Senites has a faint smile on her face, which indicates, I’d like to think, that she was happy to be married to such a man. It is a simple but beautiful statue, and testament to one of the more positive stories in the history of disability, a story of acceptance and integration.

Posted by Tom Shakespeare at 2:59 PM