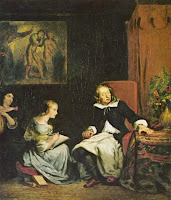 "A good book is the precious lifeblood of a master spirit, embalmed and treasured up on purpose to a life beyond life" (John Milton, Areopagitica)

Perhaps the greatest ever unread English poet? At school, Milton was on the English syllabus alongside Shakespeare, and so we studied two books of Paradise Lost for A Level, just as we had studied two books of Virgil for Latin O Level, and with as little enthusiasm. Whereas I had been forced to memorise my Virgil to pass the exam, being an incompetent classisist, I cannot even remember which books of Paradise Lost we were to read. Only the opening, itself so Virgilian, remains familiar:

"Of man's first disobedience, and the fruit

Of that forbidden tree, whose mortal taste

Brought Death into the world, and all our woe"

I did remember that Milton saved his best lines for Satan, and was accused of "being of the Devil's party" as a result. We were scarcely enlightened, at my English public school, as to his Civil War radicalism.

Philip Pullman, in ransacking Paradise Lost for the framework and title of his own epic, His Dark Materials, did us all a service in reminding us that Milton is still there on the shelf, and perhaps worth reading for his own sake. In my case, a talking book took the 10,000 lines of blank verse - or at least the best bits - off the page and into my consciousness. And what a rich and splendid feast of imagery and language it is! I am sure someone else has already pointed out that John Milton is the first fantasy writer in the English language, creating imaginative worlds, complete with monsters, treachery, romance and suspense, three hundred years before Tolkien. In contrast to his peers, he used a wider vocabulary, freer and more exciting rhythms and above all no rhyming. Dramatic, irreverent (angels having sex?), could anything more ambitious be attempted than to describe the defeat of the rebel angels followed by the fall of man?

Like Tolkien, Milton was a language scholar, with Latin, French, German, Greek, Hebrew, Italian and a little Dutch at his fingertips. Born in London, the son of a composer and scrivener of Cheapside, Milton went to Cambridge, where he thought student life of the time mostly foolish. In return, he was known as the "Lady of Christ's" due to his long hair. After college, which he found intellectually rather limiting, he continued to read widely in preparation for a poetic career. From 1638, he toured France and Italy for an extended gap year, meeting Galileo in Italy and I'm glad to note also spending time in Geneva. Returning to England, he became a polemical writer in the service of the Parliamentary cause, and after the revolution was appointed Secretary for Foreign Tongues in 1649, responsible for Latin foreign correspondence and with a sideline in anti-royalist propaganda, also in Latin.

Family life was turbulent: Milton was married three times, and was an early polemicist in favour of divorce on the grounds of incompatibility. Anne and Mary, his daughters by his first wife, rebelled against him - probably because he ignored their needs, no doubt also because he forced them to read to him in languages they did not understand. Samuel Johnson accused him of being severe and arbitrary and to have viewed women as inferior. When Milton married again, he did not bother to let his daughters know. Informed by a servant, Mary apparently replied, "that was no news to hear of his wedding but if she could hear of his death that was something".

By 1654, glaucoma had rendered John Milton totally blind, and from then on his poetry had to be dictated to helpers, who included the poet Andrew Marvell: it was in these conditions that he composed Paradise Lost, which finally appeared in 1667. In one of his shorter poems, On his blindness, Milton asks how he can now serve God, "When I consider how my light is spent", receiving the answer that to bear his "mild yoke" would be best, and concluding with the famous consolation that "They also serve who only stand and wait." Later, in Samson Agonistes, he would write of the Biblical hero

"But he though blind of sight,

Despised and thought extinguished quite,

From under ashes into sudden flame,"

The Restoration of the monarchy in 1660 saw him imprisoned for a time, and thereafter leading a quiet and impoverished life in London, retiring to rural Buckinghamshire for a year to escape the Plague. Milton's despair at the end of the Commonwealth is perhaps reflected in Paradise Lost's theme of man's fall from grace. Theologically, Milton was a sophisticated and independent thinker, and in his later life he came closest to Quakers in his approach to religion.

It's ironic, looking at the website for John Milton's cottage at Chalfont St Giles, to see that it celebrates "Royal Interest", from Queen Victoria who started the subscription list to purchase the property for the nation, to the half dozen current royals who have visited. Politically, John Milton was a supporter of regicide, a firm republican and an advocate of liberty, calling in the anti-censorship tract Areopagitica for " the liberty to know, to utter, and to argue freely according to conscience, above all liberties". A later radical poet, young William Wordsworth, would write a sonnet beginning:

Milton! thou shouldst be living at this hour:

England hath need of thee: she is a fen

Fireside, the heroic wealth of hall and bower,

Have forfeited their ancient English dower

Of inward happiness. We are selfish men;

Oh! raise us up, return to us again;

And give us manners, virtue, freedom, power.

Less lyrically, Terry Eagleton once maintained (to the tune of Land of Hope and Glory):

Chaucer was a class traitor

Donne sold out a bit later,

Sidney was a nob

There are only three names

To be plucked from this dismal set

Will smash the ruling class yet.

Samuel Johnson noted that Paradise Lost was "one of the books which the reader admires and lays down, and forgets to take up again. None ever wished it longer than it is". Access to Milton's greatest work is now rather easier for lazy moderns thanks to audio book, which seems appropriate given that he never read it on the page himself. If there was ever a poem which benefitted from being read aloud, it was Paradise Lost.