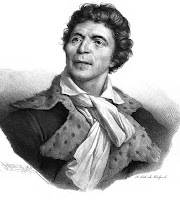 He was born in Neuchatel, son of a Sardinian religious refugee, but left for the bright lights of Paris, where he studied medicine.  He moved to London in 1765, where he began to write philosophical essays.  By 1770, he had shifted to Newcastle, where he probably worked as a vet, and was inspired by the radical MP John Wilkes.  Working mainly in Newcastle’s Central Library, fuelled by black coffee and deprived of sleep, he wrote Chains of Slavery (1774) over a three week period.  The British government went to great lengths to suppress circulation of the book - an original copy of the libertarian tract is still available in the Literary and Philosophical Society. Switching back to medicine, a work on eye diseases won Marat an honorary medical degree from St Andrews University.

Armed with this qualification, Marat returned to Paris, where he developed a lucrative medical practice working for the aristocracy, the proceeds of which allowed him to explore scientific research.  During the 1780s, he published a translation of Newton, was visited several times by Benjamin Franklin, was turned down for membership of the Academie des Sciences, but continued researching and writing, not just on science but also on political issues.

With the beginnings of the French revolution, Marat turned full time to political agitation, publishing his own paper from September 1789, which became named L’Ami du peuple: by contrast, he branded those with whom he disagreed “enemies of the people” and attacking everyone in authority.  Consequently, he was constantly in trouble.


Appearing on one occasion before the Commission of Police, Marat said:
“Gentlemen, these are the disagreeables we have to put up with in the passage from slavery to liberty. Do you really believe that a Revolution such as this could accomplish itself without some misfortunes, without the shedding of some drops of blood? I entertain no hostile design against you, but had I to choose between my duty to the Commission of Police and my duty to liberty, my choice would be already made”
His words won over the Commission, which even offered him a coach to take him home.

At one point he overstepped the mark and was forced to flee to London.  Another time, he successfully appealed to the police to shut down those who were producing counterfeit versions of his paper to discredit him – an oddly legalistic move for a revolutionary.  At various moments, Marat had to go into hiding:  “exposed to a thousand dangers, encompassed by spies, police-agents, and assassins, I hurried from retreat to retreat, often unable to sleep for two consecutive nights in the same bed.”   Less romantically, he spent time in cellars, sewers and even a quarry.


It was during this period that he contracted his famous skin disease, posthumously diagnosed as dermatitis herpetiformis.  His symptoms included itching and weight loss, together with headaches and insomnia.  Neither the debilitating disease nor his general appearance - "short in stature, deformed in person, and hideous in face" – were an obstacle to him marrying a young woman, Simone Evrard, who was a member of his typographer’s family.

In September 1792, he endorsed and encouraged the actions of the revolutionaries who dragged more than a thousand of their royalist enemies from the prisons to massacre them:  “What is the duty of the people? The last thing it has to do, and the safest and wisest, is to present itself in arms before the Abbaye, snatch out the traitors, especially the Swiss officers and their accomplices, and put them to the sword. What folly to wish to give them a trial! It is all done; you have taken them in arms against the country, you have massacred the soldiers, why would you spare their officers, incomparably more culpable? The folly is to have listened to the smooth-talkers, who counselled to make of them only prisoners of war. They are traitors whom it is necessary to sacrifice immediately, since they can never be considered in any other light.”

Jean-Paul Marat was elected to the Convention in 1792 as one of the Paris representatives.  There was an outcry when he came to the Convention, three quarters of the delegates declaring themselves to be his enemy, accusing him and Danton and Robespierre of aspiring to become a triumvirate of dictators.  In response, he stated:
“In order to better serve the country, I have braved misery, danger, suffering, I have been pursued every day by legions of assassins; during three years I have been condemned to a subterranean life; I have pleaded the cause of liberty with my head on the block!”

Marat was very active during the first half of 1793 in opposing the Girondins, the more moderate faction in the assembly, whom he considered enemies of the Republic, and who had done their best to remove him from influence or put him on trial.  He was quoted as saying “I believe in the cutting off of heads”.  Finally, in May the Girond fell, fleeing to the provinces or facing arrest in the capital.  Now the Jacobins were in charge, and the notorious Committee of Public Safety came to power.  Soon after, Jean-Paul Marat himself retired from public life, considering his political objectives achieved, and suffering from his worsening skin disease.

At this stage of his life, Marat would work in the bath, immersed in hot water, a handkerchief soaked in vinegar tied around his head, writing on a board placed across the copper tub.  It was there that a Girondist sympathizer, Charlotte Corday, came to talk to him on 13 July.  After a discussion of supposed counter-revolutionaries in the Caen region, she took out a kitchen knife and stabbed Marat in the heart.  Calling out to his wife for help, within seconds he was dead. 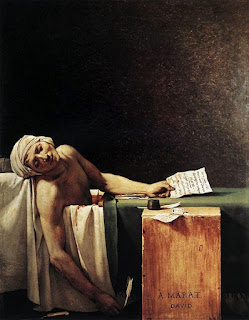 Once assassinated, Marat was sanctified by the revolution, as painted by Jacques-Louis David. In churches, his bust replaced the crucifix.  His remains were placed in the Pantheon with the inscription: “Like Jesus, Marat loved ardently the people, and only them. Like Jesus, Marat hated kings, nobles, priests, rogues and, like Jesus, he never stopped fighting against these plagues of the people.”

However, within six months, the apotheosis of Marat and other fallen revolutionaries was reversed: the remains were reburied in ordinary cemeteries and his glorious reputation was soon replaced by almost the opposite assessment – that he was a blood-thirsty demagogue who was to blame for the outpourings of revolutionary violence.  He certainly used his extraordinary powers of propaganda to whip up fervor.  Yet he seems also to have had a genuine commitment to liberty, great political insight, and a wide ranging intelligence and charm.  Brilliant but brutal, disabled yet tough as nails, perhaps Dr Jean-Paul Marat was the eighteenth century’s equivalent of  Dr Enesto “Che” Guevara?.
Posted by Tom Shakespeare at 6:14 PM 1 comment: