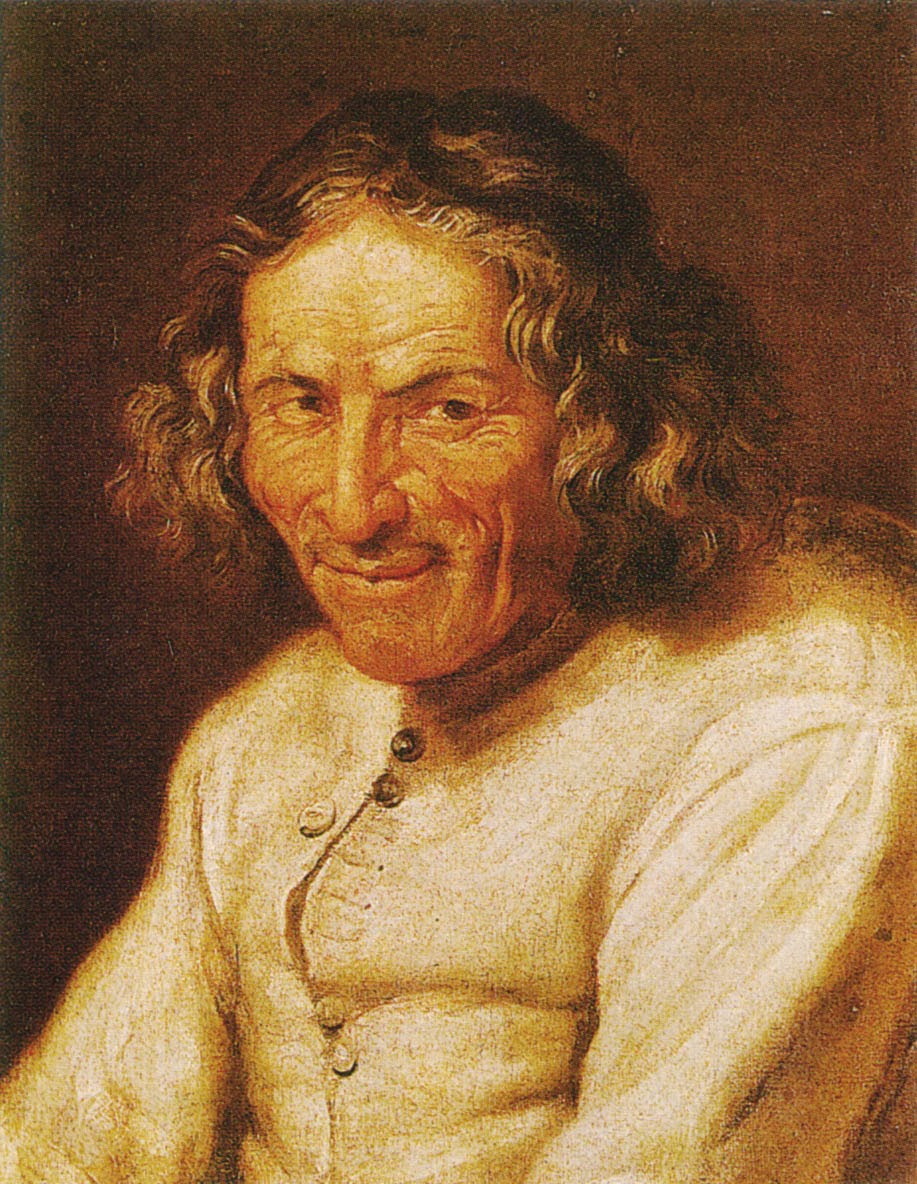 Paul Scarron was a poet, novelist and dramatist.  He was born in Paris: his father was a judge and his uncle was Bishop of Grenoble.   He studied at the Sorbonne, and then was tonsured as an abbé (a sort of confessor attached to noble houses), although he never became a priest.    He served Charles de Beaumanoir, Bishop of Le Mans, and went with him to Rome in 1635. A year later he was made a canon in Saint Julian's Cathedral in Le Mans.

Scarron became disabled in 1638.   The cause of his physical impairment is not confirmed, and at the time was a mystery.  In her memoirs, his wife blamed time he spent hiding in a swamp, after being pursued by townspeople enraged by his feathered costume.  Another story suggested that he fell into an ice-bath during the Carnival season.  His disease may have been rheumatoid arthritis, or perhaps polio.  Either way, he became paralysed, deformed in the shape of a Z, and subject to extreme pain, which he medicated with opium.  He used an early wheelchair.  As he wrote himself:

In 1640, Scarron returned to Paris, where he became known as a writer, and gained a reputation as a libertine.  He published burlesque verses (1643), the first French comic novel, and plays including Jodelet ou le maître valet, a comedy about a servant and his master (1645) and other burlesque productions.   In 1649, a penniless lady of good family became his housekeeper in the Rue d’Enfer, determined to reform him, but unsuccessfully.  Thanks to his literary success, Scarron gained favour and pensions.  However, thanks to various literary attacks on Cardinal Mazarin, then chief minister of France, Scarron lost his pensions.  Scarron’s plays were influential on Moliere and later novelists. He was later memorialized by Alexander Dumas as a minor character in a novel about D’Artagnan

Scarron resigned from his religious position in January 1652, because of his marriage to Francoise d'Aubigne, a brilliant and beautiful woman 25 years his junior.  Her father had been a Huguenot, who was imprisoned for conspiring against Cardinal Richelieu.  From a high class but impoverished background, Francoise had a difficult upbringing, cared for by family members and being educated in convent.   Her godmother’s mother took her to Paris, where she met Scarron, who proposed either to marry her, or to pay for her to enter a convent.  As a result of the marriage with Scarron, she was able to participate in Paris society, where eventually she was to become famous as Madame de Maintenon, a hugely influential figure at court who is rumoured to have secretly married King Louis XIV.

However, this was all after Scarron died.   He  was to live out his days with Francoise serving as his carer as well as his wife.  According to a 1920 entry in the Catholic Encyclopedia, Scarron “for the remainder of his life was confined to bed, being nursed by his young wife, whose devotion, piety, and patience were admirable. In a distorted body, he preserved the acuteness of his mind, and pursued his literary career”.

I would have liked to have met Scarron, because he seems such an interesting and attractive character.  He reminds me of certain disabled folk I have met in my own life.  He was a prolific writer, a witty critic of society, and clearly someone who knew how to have a good time.  I can also empathise with the pain he clearly suffered.  As he wrote in his own epitaph:

"He who sleeps here now
Deserved more pity than envy,
And suffered death a thousand times
Before losing his life.
As you pass, do not make noise here
Be careful not to wake him
Because this is the first night
That poor Scarron slumbers."
Posted by Tom Shakespeare at 12:58 PM No comments: