Before Ed Roberts contracted polio at the age of 14, he had wanted to be a marine, dragging his mother Zona to visit gun shops.  After he recovered from the disease, he was left paralysed from the neck down, able to move only two fingers and two toes.  He could barely breathe, and slept in an iron lung at night.  Yet despite this, he gained undergraduate and postgraduate degrees, worked in leadership roles in the disability movement and disability sector, married and had a son.   No wonder that he is considered a hero, and not just to disabled people.

As a teen, Ed Roberts attended school by means of a telephone connection which allowed him to listen, or speak, in class.  Then his mother insisted that he attend school for a few hours each week.  He learned to cope with the incessant staring from other students, who had never encountered a severely disabled person before.  Roberts simply decided that he would be like a star.  When it came to graduation, he encountered another obstacle: he was required to have credits in physical education and a driving licence to get his diploma.  He and his family successfully protested and he succeeded in graduating at last.

In 1962, Roberts was accepted at Berkeley.  However, he encountered another barrier when the University discovered that he was disabled.  The authorities said there would be no room for his iron lung in the student dorm.   As the Dean commented “We’ve tried cripples before but it didn’t work”.  The solution was for Roberts to live in an empty wing of Cowell hospital on campus.  He insisted that it would be a student accommodation, not a medical centre, and the Cowell Residence Program was born.

Roberts was the first student with severe disability at Berkeley, but other disabled students soon joined him.   The fledgling disability rights group which resulted became known as “the Rolling Quads”.  They campaigned for community inclusion, and advocated for access improvements, for example the first kerb cut in America.  This was a time of political change in America.  The Rolling Quads would learn about stereotypes from the second wave feminists who were campaigning, and they pointed out to the Black Power activists that people with disabilities were also oppressed.  Meanwhile the Berkeley Physically Disabled Students Program became a national and global pioneer, offering  personal assistance services, equipment and other support to students.  Roberts’ mother Zona ran the assistance service, which recruited Viet Nam war conscientious objectors among others.   In 1967, she became a Berkeley student herself, and later she became a counsellor for disabled people. 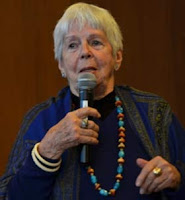 Ed Roberts got his BA in 1964 and MA in 1966, and enrolled in a PhD program, all in Political Science.  But he left to teach at another college in California.  The Disabled Students Program led to an explosion of demand from other disabled people, who were not students, because there was no other option for finding assistance.  As a result, Berkeley Center for Independent Living was founded and Roberts returned to become its Executive Director.

A friend of mine, Jean, remembered meeting Ed at Zona's house around this time:

"I went in into the living room, and it was quite a big room, and there were six people in there, and one of them was in an iron lung, and the other five were in wheelchairs.  And they were watching a basketball game and Ed, in the iron lung, was watching it in a mirror over his head, upside down as it were, and they were all absolutely stoned out of their minds.  And I thought 'Oh my God!'.  I was just in a complete state of shock...  He was an extraordinary person because he wanted to have a life, and he felt he had a right to have a life.

There’s a great story about him, when he first was accepted at UC Berkeley, he was described as 'a helpless cripple', and 'the first crippled person to go to UCB'…I just thought, after I’d got to know him a bit, it seemed so funny to me that someone would describe Ed as helpless, because a less helpless person you would never wish to meet, because he was so empowered to get what he wanted.

Ed was quiet, and very articulate, and it sounds funny to say that, because his conversation was constantly interrupted with the breathing, the iron lung breathed for him, and when he was out of it, it was maybe four hours a  day at that point, he had to do this special breathing... so that his conversation was always interrupted by the sound of his breath... I was so conscious of his vulnerability in the world because just one thing goes wrong and he will suffocate, he will die.

Partly because of his breathing problems there was nothing loud about him, and he was very definite, and he also made very good use of his words.  He was very economical with his words, because he had to be, so he would work out what he wanted to say and he would say it, and it had an impact when he said it."


In 1976, the Democrat Governor Jerry Brown appointed Roberts as Director of the California Department of Vocational Rehabilitation, a role he retained until the political landscape changed in 1983.  Ironically, it was this Department which had originally said that Roberts was too severely disabled to work.  While in Sacramento, Roberts married Catherine McDugan, an occupational therapist, and their son Lee was born in 1978.

After the political landscape changed and he left his State post, Ed Roberts was awarded a MacArthur Fellowship – one of their “genius awards” - giving him five years stipend plus academic funding.   He contributed the latter to the new World Institute on Disability, which he had founded alongside Judy Heumann and Joan Leon back in Berkeley.  Roberts remained director of WID for the rest of his life.  An inspirational figure to both the American and global disability movements, Roberts also contributed to the creation of Disabled People International in 1991.


On March 14 1995, Ed Roberts died suddenly, either from a heart attack or stroke.  However, he is not forgotten.  The day of his birth, 23 January, has now become celebrated in America as Ed Roberts Day.  His wheelchair is in the Smithsonian Institution in Washington DC. 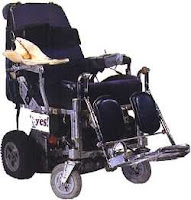 In his memory, the Ed Roberts Campus was founded in Berkeley in 2011, bringing together the Centre for Independent Living, the World Institute on Disability, the Disability Rights and Education Development Fund, and other organisations in a fully accessible setting.  Berkeley remains globally renowned as the birthplace of modern disability rights activism, with Ed Roberts as the godfather of the movement.