A brilliant man of humble origins, who is barely remembered and less appreciated, Johnson wrote the most famous of English dictionaries, and a wealth of other critical and creative contributions, despite struggling with both poverty and a range of health conditions.

Samuel Johnson was born in Lichfield, son of a bookseller, on September 18, 1709.  He was a sickly baby who contracted scrofula, which left him with physical scars.  Being touched by Queen Anne – the famous and mythical cure  for “the king’s evil” – did not help him.  He was also blind in one eye and had poor hearing, perhaps as a result of contracting tuberculosis from his nursemaid.  But his most prominent disability, which became more obvious as he grew up and which ruined his attempt to earn a living as a school teacher, has been posthumously diagnosed as Tourette’s syndrome.  Johnson was famous for his tics and gesticulations. William Hogarth described him "shaking his head and rolling himself about in a strange ridiculous manner" and concludes that he was "an ideot".  Johnson was also reported as making odd clucking and whistling sounds, and exhibiting obsessive compulsive behaviour.  Throughout his life, particularly towards the end, he suffered periods of depression. As Lennard Davis writes "If Johnson had lived during the twentieth century, he most probably would have been institutionalised, given shock therapy, or more recently put on a regime of antidepressants."   Davis is surprised that his contemporaries wrote about him as "a brilliant man who had some oddities rather than as a seriously disabled person".

As a child, Johnson displayed prodigious intellect, benefitting from the easy availability of books in his father’s shop.  But poverty undermined his opportunities for formal education.  He was unable to spend long enough at Oxford University to gain a degree, for example.    In 1737 he moved to London, where he made a living as a journalist and man of letters.

Johnson’s literary output was diverse and influential: an edition of Shakespeare, critical essays on English poets, together with political and religious writings.    Johnson was a Tory, but also a committed Anglican, who behaved in a notably Christian way.   For example, he was very hospitable to friends, several of whom lived with him in his penurious and eccentric household.   He was an opponent of slavery, and expressed some progressive views about women’s equality – although not consistently.  In his magazine, The Rambler, and in his comments – such as "A decent provision for the poor is the true test of civilization” – Johnson  demonstrated a social conscience, which coexisted with his support for social hierarchy. 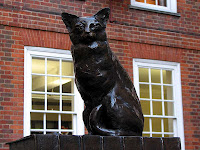 Samuel Johnson was one of history's great tea drinkers, consuming dozens of cups each day.  Reviewing a book critical of tea, Johnson described himself as "a hardened and shameless tea-drinker, who has, for twenty years, diluted his meals only with the infusion of this fascinating plant; whose kettle scarcely has time to cool; who with tea amuses the evening, with tea solaces the midnight, and, with tea, welcomes the morning".  Johnson was also particularly fond of cats, such as the famous Hodge, memorialised in a London statue.

In 1735, he had married the widow of a friend, Elizabeth Porter, known as Tetty: she was more than 20 years older than him, but they had a tender relationship until her death in 1752.  Despite the bereavement, the 1750s were Johnson’s most successful decade.  After nine years work, he completed his famous Dictionary,  with its 42,773 entries. It was not the first, not the longest, not the most accurate English dictionary, but it became the one which defined the language.  His innovations were to include words that ordinary people used, together with 100,000 quotations showing their usage.  During this period, he also he wrote the essays in The Rambler and The Idler, and his novel, Rasselas.  Finally in 1762,  his labours were rewarded with the grant of a government pension.

Soon afterwards, he met James Boswell, a young Scotsman who was to write the famous biography of the man who thanks to him became known as Dr Johnson.  It was from the record of his brilliant conversation preserved through this Life that so many of those memorable quotations derive: “patriotism is the last refuge of a scoundrel”; “when a man is tired of London, he is tired of life”. It was Johnson who called second marriages “a triumph of hope over experience” and who said "The only end of writing is to enable the readers better to enjoy life, or better to endure it."

On December 13, 1784, Samuel Johnson died as a result of a stroke, after a period of illness and depression.  Widely acclaimed as a critic as well as a lexicographer, he was buried in Westminster Abbey.