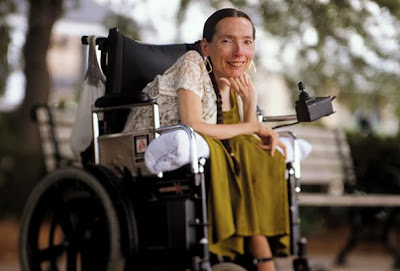 “I am in the first generation to survive to such decrepitude. Because antibiotics were available, we didn't die from the childhood pneumonias that often come with weakened respiratory systems. I guess it is natural enough that most people don't know what to make of us.”
Born in Laurinburg, North Carolina on July 8, 1957, Harriet McBryde Johnson was one of five children born to parents who were college lecturers.  A  sister died of the same progressive neuromuscular condition that she herself experienced.  Thanks initially to the family’s economic security and later to her own professional career, she benefitted from the personal assistance and the power chair that enabled her to participate in American society.  She always knew that she was one of the privileged ones, who could escape what she called the “Disability Gulag”.
From an early age, Johnson realized that she would have a limited life expectancy.  She was an activist by the time she was a teenager at special school, trying to get an abusive teacher fired.  Like thousands of other disabled people, she thought that television charity telethons – such as the annual Jerry Lewis event on American TV – were demeaning and counter-productive.  Later she would describe herself as holding the world endurance record for protesting the Jerry Lewis telethon.  In return, Lewis described activists such as Johnson as the equivalent of Lebanon’s Hezbollah.
Harriet McBryde Johnson earned undergraduate and postgraduate degrees in history and public administration in Charleston.  After graduating from the University of South Carolina Law School in 1985, she set up in private practice as a lawyer, where she specialized in welfare and civil rights claims for poor people with disabilities.  She was also active in the Charleston Democratic Party, first as secretary and then as chair.
Johnson’s intelligence and confidence made her an ideal advocate for disabled people, not just in the courtroom but also in the political arena and through the pages of America’s newspapers.   She also had a wry sense of humour, as another extract from her writing demonstrates:
“It's not that I'm ugly. It's more that most people don't know how to look at me. The sight of me is routinely discombobulating. The power wheelchair is enough to inspire gawking, but that's the least of it. Much more impressive is the impact on my body of more than four decades of a muscle-wasting disease. At this stage of my life, I'm Karen Carpenter thin, flesh mostly vanished, a jumble of bones in a floppy bag of skin.”
Beginning in April 2001, her most famous intervention was a series of encounters with the Princeton philosopher Peter Singer.  A utilitarian, Singer has notoriously challenged the value of life, and suggested that it should be permissible for severely impaired newborns to be killed. In 2002, she debated publicly with Singer, and subsequently published “Unspeakable conversations”, an article in the New York Times, the source of the self-description above.  Johnson pointed out that: “The presence or absence of a disability doesn’t predict quality of life.”  Drawing on her own experience as someone with a neuromuscular impairment, she argued:
“We take constraints that no one would choose and build rich and satisfying lives within them. We enjoy pleasures other people enjoy, and pleasures peculiarly our own.”
Singer’s theories may lead him to obnoxious conclusions on the topic of disability, but he is no bigot: on other issues he is very progressive.   He is also of course formidably intelligent.  On the one occasion that I debated with him on radio, I found him a rather cold and intimidating opponent.  By matching him in person and in print, Johnson made a huge impact on all those who heard or read her, enabling millions to access and understand the arguments that the disability rights organization Not Dead Yet was propounding.  In particular, as an atheist Democrat, she helped non-disabled people understand that arguments against assisted suicide and selective abortion came not only from Christian conservatives, but  also from the disability rights community.
Johnson published two books.  The first, a memoir called Too Late to Die Young, was published in 2005 and contains eloquent descriptions of living with personal assistance, of fighting prejudice and of the value of life as a disabled person, what she called “bearing witness to our pleasures”.  In the preface, she wrote:
“For any Charleston lawyer, any Southern lawyer for that matter, storytelling skill comes so close to being a job requirement that maybe it should be tested in the bar exam.  Beyond that, for me, storytelling is a survival tool, a means of getting people to do what I want.”
A novel, Accidents of Nature, about a girl with cerebral palsy who had never known another disabled person until she went to camp, was published in 2006.
When Harriet McBryde Johnson died two years later, aged only 50, the fact that she had obituaries in both the New York Times and the Wall Street Journal demonstrates the impact her life and writing had had on American culture and politics.

William Soutar was born in Perth, Scotland, in 1898, son of John, a joiner, and Margaret.  At school, he excelled on the sports field, and led a pupil strike.  At Perth Academy, he began to develop his literary skills.   Later he would recall:

“That was my eighteenth year while yet the shadow of war was unacknowledged. Then I was one of the fleetest at the Academy; one of the strongest; first in my year at most things; I was writing poetry; I was in love; I was popular both in the classroom and the playing field. I never reached this condition of living fullness again except in brief moments.”

In 1917, he joined the Navy and served for two years.  By the end of his military service, he was beginning to suffer from skeletal pains.   He went up to Edinburgh University, initially to read medicine, but then changed to English.  At this time, Soutar sent some of his poems to Hugh MacDiarmid, who described him as already being in the top fifty Scottish poets.  Soutar's first volume of poetry was published before he graduated in 1923.  But by then his symptoms had spread from his legs to his back, which prevented him pursuing his plan to become a teacher.

The family moved house to 27 Wilson Street, now a museum to the poet.  His condition continued to worsen, and eventually he was diagnosed as having ankylosing spondylitis, an incurable spinal condition.   On getting his diagnosis,

‘suddenly I halted in the dusk beside the pillars of West St. George’s, Edinburgh, and stood for a moment bareheaded, saying over to myself, “Now I can be a poet.” ‘

He would become a leading figure of the Scottish Literary Renaissance.  As time went on, more and more of Soutar's poetry was written in Scots:

Nae man wha loves the lawland tongue
but warstles wi' the thoucht-
there are mair sangs that bide unsung
nor a' that hae been wroucht.

Ablow the wastrey o' the years,
the thorter o' himsel'
deep buried in his bluid
he hears a music that is leal.

And wi' this lealness gangs his ain;
and there's nae ither gait
though a' his feres were fremmit men
wha cry: Owre late, owre late.

By 1930, he was confined permanently to bed.  His father made adaptations so he could live comfortably at home in a ground floor bedroom with a large window looking onto Craigie hill.

Braw are the Grampian Mountains
Whan simmer licht is still;
And gowdan are the Carse-lands
Ablow the Corsie Hill.
Yonder the gowdan steeple
Spires up frae the auld toun,
And the brig wides through the water
Owre far awa for soun’.
And its easy in this quiet,
Sae gowdan and sae still,
To lippen that a’ the world
And your ain hert will hale.


Soutar would lie propped up in bed, in jacket and bow tie, and receive a constant stream of visitors, many of them leading literary figures, and when they went away, he would write poems.  He kept a diary, published as Diaries of a Dying Man, and one entry reads:

'I see eight people have called this week...this means at least twenty hours at least spent in mediocre conversation. My God!'

He yearned for emotional and sexual release, but lived under the protection of his fiercely religious parents.

When his parents adopted a five year old orphan cousin, Evelyn, this spurred Soutar to write poetry for children, what he called bairn-rhymes, a volume of which were published in 1933,  For example:

For a long time, he was best known for these short verses for children.

Willie Soutar was a socialist and a nationalist.  He wrote in 1932:

‘My life’s purpose is to write poetry – but behind the poetry must be the vision of a fresh revelation for men.’

In July 1943, he was diagnosed with tuberculosis, and by October he was dead, aged only 45.   The editor of his diaries wrote:

“His poetry was the prize wrested from a battle against death and despair which he fought for half a lifetime.”

Seeing life with clear eyes, knowing joy as well as bleakness, Soutar himself summed up life in a poem:

Posted by Tom Shakespeare at 3:56 PM No comments: