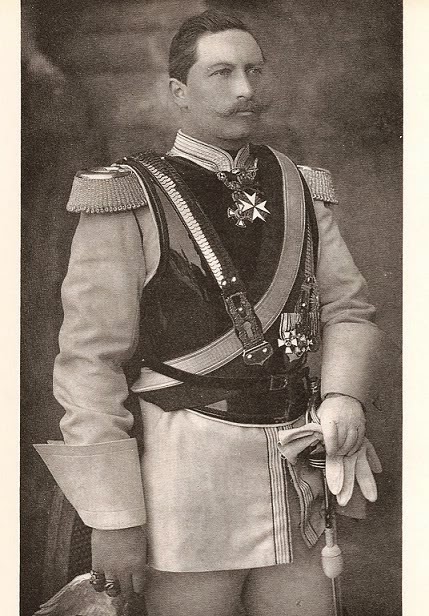 Nearly twenty years ago, I reviewed Young Wilhelm, John Röhl’s extraordinarily detailed book about the early life of Kaiser Wilhelm II.  Now, in the hundredth anniversary of the outbreak of the First World War, perhaps it’s an apt time to revisit this story for this blog.

Born on 27 January 1859, Wilhelm was the eagerly anticipated first grandson of Queen Victoria and equally anxiously awaited heir to the Kingdom of Prussia.  Rejoicing was widespread through England and Germany.  Queen Victoria wrote to a German friend “we are proud and happy that it is our child who has given this son to your country”.

However, the birth itself was highly traumatic for all concerned, because the future Kaiser was in a breech position in the womb.  18 year old Princess Vicky went through terrible suffering for 13 hours before chloroform was applied by Sir James Clark, Queen Victoria’s personal physician who had been sent over to Berlin for the birth.  The Royal baby was turned forcefully, and manipulated by the arms in order to be delivered: he suffered a lack of oxygen for about eight minutes during the end stages of the labour, and after birth had to be revived by a series of slaps from the midwife.

As a child, Wilhelm was hyperactive, and possibly minimally brain damaged.  His left arm was paralyzed as a result of the violence of his birth, and was 15 cm shorter than his right.  Sigmund Freud considered that Princess Vicky had deprived her child of her love because of his affliction, and that this resulted in the Kaiser’s personality problems.    Yet the evidence suggests that Vicky, like many parents of disabled children, had mixed emotions – hope, pride, depression, helplessness and desperation.   Both parents seem to have been loving towards their child.  However, perhaps because of extensive medical treatments, Wilhelm did not form a close bond to his mother and later felt that she had not been sufficiently supportive and loving.

Blaming his English mother may have been a convenient move for later German historians seeking to excuse their militarist monarch.  It was more likely that the blame lay with the corrective treatments that were attempted in order to improve the strength and function of his withered arm.  Röhl concludes that, though administered with the best of intentions, they amounted to child abuse.  One method was to insert the boy’s paralysed arm into a freshly killed hare for a so-called “animal bath”.  Another was to tie up the healthy right arm, to try and force him to use his left arm.  His mother recorded how “fretful and cross and violent and passionate” the two year old would become.  As he neared the age of four, he was noted to have a twist in his neck, as if he was turning away from the impaired arm that was such a source of psychological stress for the whole family.  Now he was put in a machine designed to straighten the neck by force.  At the age of six, the tendon on his neck muscle was cut.  Next, it was noticed that he could not straighten his left arm: another operation was threatened, but instead an “arm-stretching machine” was used, together with exercises.  Another approach was daily electrotherapy, but by the age of ten, Wilhelm was so unhappy about these bouts of treatment that it was discontinued.  In all, the poor boy had twelve years of cruel and ineffective treatment.

Wilhelm’s parents had liberal ideas, and tried to bring him up as an Anglophile.  But the tutor he was given from the age of six seems to have been rather brutal, forcing him to learn to ride, on the instructions of the Crown Princess.   Wilhelm was also shaped by the militarist Prusssian society in which he found himself.  He grew to respect a more autocratic approach than the more consensual English style of constitutional monarchy which his mother tried to impart.  When he joined a Guards regiment at the age of 21, he found his natural home among the society of soldiers.

On the death of Kaiser Wilhelm I, Wilhelm’s father only ruled for 99 days before dying of throat cancer.   In 1888, Wilhelm II acceded to the throne at the age of 29.  He rejected Chancellor Bismark’s cautious approach to foreign policy.  In 1890, he dismissed the old Chancellor completely, considering him a “boorish old killjoy”.  Wilhelm exerted more control himself, rather than leaving policy to his Chancellors.  Some of this was beneficial – such as his reforms to the rather traditional Prussian educational system.  Much of it was not – such as his desire to build up a strong navy.

Wilhelm was insecure, unstable, impatient, and lacked focus and direction.  He was arrogant and obnoxious, particularly with his English relatives.  Though he was related to most of the monarchs of Europe, he did not like them, nor they him.  However, he was anxious for his grandmother’s approval, and went to be at her bedside when Queen Victoria was dying in 1901.

Wilhelm was prone to imperialist rhetoric – such as his speech evoking the memory of Attila the Hun when sending troops off to help suppress the Boxer rebellion in China.  He regularly made diplomatic faux pas, such as a disastrous 1908 interview with the Daily Telegraph in which he managed to alienate not only the English – whom he called “ mad, mad, mad as March hares” - but also the French, Russians and Japanese.

All of this, particularly the German military build-up gives a sense of tragic inevitability to the events leading up to the First World War.  But as recent historical accounts have shown, Austria and other countries were also very much to blame.  After the war started, Wilhelm did not play a leading role in German policy. When it finished with the defeat of German and the loss of ten million lives, Wilhelm abdicated and went into exile in the neutral Netherlands, where he died on 4 June 1941.  He had hoped that Hitler would revive the monarchy.  But the Fuhrer blamed the Kaiser for the humiliations of the First World War and kept him at arm’s length.

Wilhelm was not a terrible monarch because he was disabled.  But his impairment did affect his personality, particularly due to the appalling medical treatment he endured, his strained relationship with his mother and hence his dislike of the English, and the arrogant strain in his personality which resulted from his insecurities.

Posted by Tom Shakespeare at 1:24 PM