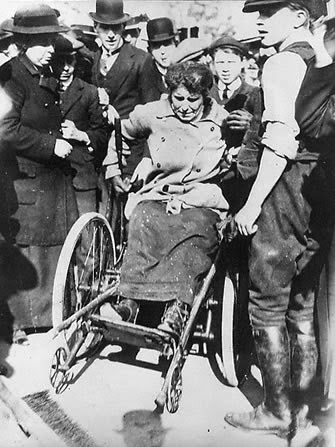 The Women's Suffrage campaigner Rosa May Billinghurst was born into a middle class family in Lewisham in 1875.  At five months old, she contracted an illness – almost certainly polio – which left her completely paralysed.   Despite some recovery, she was left paraplegic, relying on calipers and crutches to walk, and usually resorting to a three wheeler wheelchair which was pedalled by hand.  Despite these difficulties, she was as stalwart a political campaigner as any contemporary disability movement activists.
Like prototype social workers, May and her sister Alice worked on the streets with prostitutes, in the Greenwich workhouse, and in a Sunday School.  Politically, May started out as a member of the Women’s Liberal Association, but radicalized by her experiences of community work, she joined the militant suffragette Women’s Social and Political Union in 1907.  Her family donated money to the cause, but May was to put her own body on the line.
Always on her tricycle, decorated with WSPU ribbons and banners, she participated in the suffragette march to the Albert Hall on 13 June 1908, distributing leaflets advertising the forthcoming Hype Park demonstration.  In July, she worked for the WPSU at the Haggerston by-election.  This included teaching local children suffragist songs.  Two years later, she founded the Greenwich branch of the WPSU.  As a result of all her activities, she became known as “the cripple suffragette”, and her disability led to increased publicity for the campaign.
May repeatedly came into contact with the police and the authorities.  In November 1910, she was thrown out of her tricycle during the “Black Friday” demonstration, and the police pushed her down a side street and removed the valves from her tyres. She was one of 159 women arrested that day.    Another suffragette wrote later how,
“I remember hearing startling stories of her running battles with the police. Her crutches were lodged on each side of her self propelling invalid chair, and when a meeting was broken up or an arrest being made, she would charge the aggressors at a rate of knots that carried all before her.” 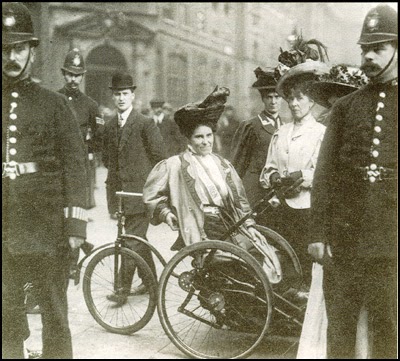 A year later, May was arrested again in Parliament Square and sentenced to five days in prison for obstructing the police.  In March 1912, she was sentenced to one month’s hard labour in Holloway Prison after smashing windows as part of the WPSU campaign:  she had hidden the stones for flinging at windows under the rug over her legs.
In December that year, she was sentenced to eight months in prison, after being found guilty of firebombing Deptford pillar boxes.   This was part of the WPSU campaign which the government claimed destroyed more than 5,000 letters.
On this last occasion, she went on hunger strike, and was forcibly fed, causing damage to her teeth and general health.   In the Fawcett Women’s Library, there are many letters sent on her behalf by family members and fellow campaigners, objecting to her being force fed.  As a result of this pressure, she was ordered to be released by the Home Secretary after two weeks in prison.
By March 1913, she had recovered sufficiently to be able to speak about her experiences at a meeting in West Hampstead.  In June of that year she took part in the funeral procession for Emily Wilding Davison – the suffragette who had flung herself at the King’s horse at the Derby and been trampled to death.  In her invalid tricycle as always, May wore white.  On 21 May 1914, she chained herself and her chair to the railings as Buckingham Palace as part of another WPSU protest.  It was on this occasion that Sylvia Pankhurst recalled her being flung out of her chair by two policemen.
Once the First World War broke out, WPSU suspended campaigning, and members were released from prison.  May supported Christabel Pankhurst’s Smethwick election campaign in 1918, the year that the Qualification of Women Act was passed.
After women's suffrage had been achieved, May ceased to be so politically active and little more is known of her.  She seems to have lived in Sunbury on Thames, Surrey and  to have had an adopted daughter.  She died on September 4, 1953.
Posted by Tom Shakespeare at 6:08 PM