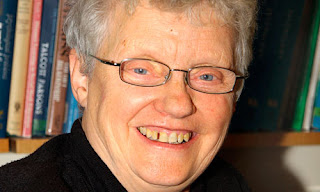 Mabel Cooper was one of the leading lights of this new generation of people with learning difficulties.   She was born in London, where her mother lived on the street.  The pair were picked up by the authorities, and sent to separate institutions, and her mother subsequently disappeared.  Mabel spent her childhood in various children’s homes.  She did not attend school, and consequently did not learn to read and write.  Later she was labeled as having learning disability and sent to St Lawrence’s Hospital, a long-stay institution in Caterham, Surrey, which she lived for the next 20 years.

“When I first went in there, even just getting out of the car you could hear the racket.  You think you’re going to a madhouse.  When you first went there you could hear people screaming and shouting outside.  It was very noisy but I think you do get used to them after a little while because it’s like verywhere that’s big.  If there’s a lot of noise, and they had like big dormitories, didn’t they?”

A similar institution played a much smaller role in my own life, because my father was the GP for Manor House Hospital in Aylesbury, a smaller, residential hospital for people with intellectual disability.  Every Christmas Day from as early as I can remember, my dad and I would visit the wards – or “houses’, as they were called – and meet the residents and staff.   Later, I worked at Manor House during my year off before University, and in my vacations.  I remember a friendly, cheerful place, which was clean and warm and seemed benign.   As you toured the hospital, you encountered a cross-section of the intellectual disability population, ranging from people who were profoundly impaired, lacked speech and barely interacted with you, through to Bierton House, which was where people who had mild intellectual disability lived.   Many of these folks were great communicators and very engaging, and they always interacted with my father and myself.  One of them, David Seward, became a family friend and would come for tea at my home from time to time.  It was this group in particular who one felt should never have been in an institution in the first place.

Mabel  Cooper, who I never had the opportunity to meet, seems to have been such a person.  Mabel left  St Lawrence’s Hospital in 1977 to live in the community.  Later, the hospital was completely closed down, and she was given the honour of pressing the button to blow it up.  She was adamant that large institutions should never be allowed in future.

Cooper had become an intellectual disability celebrity through her work with Croydon People First, a self-advocacy group.  She eventually became chair of London People First.  In both roles, she supported other people with learning difficulties to be heard.  She collaborated with Dorothy Atkinson and other researchers at the Open University, who helped people with learning difficulties to research and tell their stories as part of the Life History Project.

Mabel  Cooper’s own life story was published in Forgotten Lives (1997), and inspired many readers with and without learning difficulties.  Mabel went into schools to  talk to children and young people about the discrimination and bullying which people with learning difficulties face.  With Dorothy Atkinson, she also presented at conferences.  She seems to have been a very charismatic person, who used humour to get her points across and changed perceptions about intellectual disability.

As recognition for her work, Mabel Cooper was awarded an honorary degree by the Open University, during a ceremony at the Barbican in London in 2010.   As  Dorothy Atkinson has written in a tribute for The Guardian, Mabel

“had a tremendous ability to draw on personal experience to tell stories that, written or spoken, engaged and inspired her readers and listeners in many walks of life.”

The inclusion of her obituary in the Radio 4 Last Word programme, after she died of cancer in April 2013, is another example of how this ordinary woman with intellectual disability achieved unprecedented recognition and made an extraordinary impact.

Posted by Tom Shakespeare at 8:37 PM