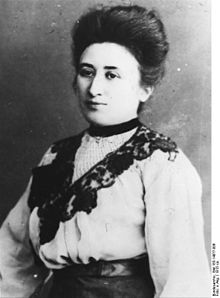 When I was a politics student, it was the democratic socialists, not the authoritarians like Lenin who appealed to me, and in particular  Rosa Luxemburg and Antonio Gramsci: both committed to freedom; both great writers; and both disabled people who paid a heavy price for their courageous work in pursuit of a socialist utopia.

Rozalia Luksenburg was born on March 5, 1871 in Zamosc, Poland: her father was a timber merchant; her mother was the daughter of a rabbi.  The family moved to Warsaw when she was two.  By the time she was five, she could read and write.  However, a medical error left her disabled: doctors had thought she had TB, when in fact she had a dislocated hip.  Confined to a cast, she was kept in bed for a year.   She ended up with one leg shorter than the other, and had a pronounced limp for the rest of her life.  From then on, she dreaded the pity of strangers, and made great efforts to minimize the limp and not draw attention to herself.

The smallest in her class, and disabled, she devoted herself to studying at the Russian High School.  She excelled at school, and her political conscience was growing also: she wrote to a friend “My ideal is a social system that allows one to love everybody with a clear conscience.  Striving after it, defending it, I may perhaps even learn to hate.”  After graduating in 1887, she joined the Polish Marxist party, Proletariat, which had gone underground after organizing strikes the previous year that were brutally crushed by the Russian authorities.

In February 1989, she travelled to Zurich for the university education which was denied to women in Poland.  Registering as “Rosa Luxemburg”, she started out living with the family of a German socialist exile, Karl Lübeck.  He needed assistance due to his visual impairment, which increased her familiarity with German Socialist Party (SPD) writers such as Kautsky, Liebknecht, Babel and Bernstein.  She also met Leo Jogiches, a Lithuanian Jewish socialist activist.  To her, the attraction of this romantic revolutionary figure was obvious, but she could not understand what he saw in her.  After all, one of his friends described her as follows:

“She was of low build, with a disproportionately large head; a typical Jewish face with a thick nose… a heavy, occasionally uneven walk, with a limp; her first appearance did not make an agreeable impression but you had only to spend a bit of time with her to see how much life and energy was in the woman, how clever and sharp she was, and at what a high level of intellectual stimulation and development she lived.”

Together, they founded a newspaper and then the Socialist Party of the Kingdom of Poland in 1894.   Rosa moved to Paris  that year to research for her doctoral thesis, sending letters back to Jogiches asking for more funds and berating him for his emotional shortcoming.   In 1898, after the award of her doctorate and the death of her mother back in Poland, Luxemburg moved to Germany, which she and Jogiches thought the country most likely to have a socialist revolution.  She earned a meagre living through journalism.  After some persuasion, Jogiches joined her.

In her journalism, in her work with the SPD, and in her activities in the Russian Social Democratic Party, Luxemburg was uncompromising and often got into ideological disputes.  For example, she took a different line to Lenin’s advocacy of  democratic centralism in What is to be done?, which she said was “imbued with the sterile spirit of the night watchman state”.  However, in practise she she also could be very controlling, as when she expelled Polish party members who disagreed with her.

In 1904, she was imprisoned for three months for comments critical of the German Kaiser.  She wrote to Karl Kautsky: “the interests of the masses is on the move: I feel it even here penetrating through the prison walls.”  The attempt at revolution in Russia in 1905 filled her with excitement – “the revolution is splendid.  All else is bilge” and swelled the membership of the Polish socialist party.  Although she only arrived in Poland as the revolution was subsiding, but was imprisoned.  She escaped through a combination of illness – anemia, and liver and stomach problems – and bribery.  She spent the next summer recuperating in spas in Russia and Finland, and returned in late 1906 with the manuscript of her book The Mass Strike, which sought to derive lessons for Germany from Russia’s first attempt at revolution.  At the 1907 congress of the Russian party, Trotsky described her as:

“a little woman, frail and even sickly looking, but with a noble face and beautiful eyes that radiated intelligence; she captivated one by the sheer courage of her mind and character.”

Luxemburg opposed the First World War, criticizing Lenin’s nationalist tendencies.  She broke with Karl Kautsky and the SPD when it eschewed revolution and promoted the parliamentary road to socialism.  She had a troubled relationship with the USPD, a smaller left-wing party.  She puzzled over the continuing survival of capitalism, despite Marx’s predictions of its imminent collapse, before deciding that imperialism was enabling the system to prolong itself by exploiting colonial dominions, together with the role of the arms race in propping up industrialism.

In 1915, she was sent to prison again, for incitement to disobedience the year before.  In 1916, the Spartakus League was formed, with Luxemburg writing the guiding principles from her prison cell: the League denounced both the Kaiser and the SPD for its treachery to international socialism in supporting the war.  Soon after, in February 1916, she was released from prison, sick and in pain, but a few months later she was taken into “protective custody” again, detained indefinitely.  She had to leave her cat Mimi behind this time, and was devastated when the cat, substitute for the child she never had, died the following year.  Immured in a prison fortress, Rosa read, wrote, and tended her flowers: “I feel at home anywhere in the world where there are clouds and birds and human tears”, she wrote to a friend in February 1917.  She suffered greatly from stomach pains and migraine, but her morale soared with the advent of the Russian revolution.

In January 1918, revolutionary shop stewards in Berlin led a general strike for peace, freedom and bread.  Meanwhile, Luxemburg had written a critical appraisal of the anti-democratic character of the Russian revolution – “freedom is always and exclusively freedom for the one who thinks differently” - which was not published until 1922.  Her heart was for the Bolsheviks, even though her head thought differently – “enthusiasm coupled with the spirit of revolutionary criticism – what more can people want from us?”

From September 1918, with the end of the First World War inevitable, events developed fast in Germany, as the Kaiser attempted to move to a constitutional monarchy.  Political prisoners were released in October – but not Luxemburg, who had never been found guilty of a crime.   On November 3, the German fleet mutinied in Kiel, and soon councils of workers, soldiers and sailors were controlling cities like Kiel, Hamburg, Hanover and Munich. A Bavarian Socialist Republic was declared.   Yet the remnants of the old regime and the SPD government in Berlin plotted to keep hold of power and prevent all-out revolution.  On 8 November, Rosa Luxemburg was released from prison, a white-haired, sick and exhausted woman.  On 9 November, the Kaiser abdicated.  Berlin was full of workers brandishing red flags.  Leibknecht declared the Socialist Republic of Germany from the balcony of the royal palace and the Revolutionary Shop Stewards occupied the Reichstag.

However, the revolutionary congress that was held the next day was dominated by the SPD and the USPD.  The SPD prime minister, Ebert, conspired with the Army to defend the new  democratic republic and prevent revolution.  The Spartacists, led by Luxemburg and Leibkneht, were calling for workers control.  Civil war seemed to be looming, which was the last thing which the war-weary populace wanted.  The SPD covertly mobilised the Freikorps, comprised of demobilized ex-army paramilitaries.  A National Congress met on 16-20 December, but because it was only open to workers, Leibknecht and Luxemburg were excluded – again they were being out-maneuvered by the SPD and the USPD – and the voting at the Congress went against them.

On 30 December 1918, the Spartacist League and other workers representatives formed the Communist Party of Germany.  A big demonstration on 5 January 1919 called for Ebert’s SPD government to be deposed, and the SPD newspaper’s offices were occupied: Luxemburg realised that this was bad timing, but was forced to support her revolutionary movement.  On 8 January, the Freikorps went into action, machine-gunning the offices of the Communist newspaper, The Red Flag.  Street fighting between left and right followed, with over 1000 killed.  Luxemburg wrote her final article:

“The revolution will ‘raise itself again clashing’, and to your horror it will proclaim to the sound of trumpets: I was, I am, I shall be.”

On the evening of 15 January 1919, Luxemburg and Leibknecht were arrested.  She was ordered to be taken to prison by a Freikorps unit:  going out to the car, she was hit with a rifle butt, and then as they drove away, she was shot as she lay in the back of the car.  When the car reached the River Spree, her body was thrown in.   Minutes later, Leibknecht was also driven away and shot.  The next day, Jogiches sent a telegram to Lenin: “Rosa Luxemburg and Karl Leibknecht have carried out their ultimate revolutionary duty.”  He himself was arrested on 10 March, tortured, and “shot while trying to escape”.   A few months later, Luxemburg’s body was found in the river.    On 13 June, she was buried in the Friedrichsfelde cemetery, at a ceremony attended by workers, soldiers and sailors carrying banners and red flags.  The leader of the Communist Party and Clara Zetkin spoke at the funeral, and the mourners sang the Internationale.

Rosa Luxemburg’s personal life was complex.  She lamented the impact of her political career on her family: “Politics is an inane Baal worship, driving people – victims of their own obsession, of mental rabies – to sacrifice their entire existence.”  Her relationship with Jogiches was troubled, and she more than once started relationships with other men.  In 1907, the 36-year-old Luxemburg replaced him as her lover with the 21-year-old son of Clara Zetkin.  In 1914 she took up with Paul Levi, her defence lawyer, another younger man.  Her attitude to her servants has been described as “feudal”: she was a fastidious employer, with a love of the working class that was mainly theoretical.  She could be vindictive in pursuing a political quarrel, for example against Karl Radek, a member of the Polish party.  Yet she also had a great yearning for peace and calm.  In the months before her death, an exhausted Luxemburg said to her friend Mathilde Jacob:

“Can you tell me why I live constantly like this, without any inclination to do so?  I would like to paint and live on a little plot of land where I can feed and love the animals.  I would like to study natural science but above all else to live peacefully and on my own, not in this eternal whirlwind.”
Posted by Tom Shakespeare at 10:51 AM