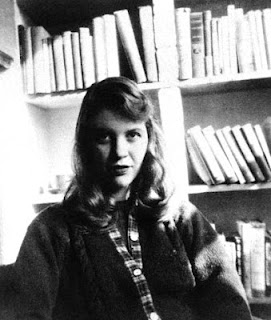 A very welcome guest post to mark the 50th anniversary of the death of Sylvia Plath, contributed by my dear and esteemed friend Jackie Leach Scully, another graduate of Newnham College.

There are a lot of women of a certain age – around 50 – who have, let’s say, an ambivalent relationship with the story of Sylvia Plath.  Some of us were attracted to her by the romantic suicide magnet, at least before we stopped being adolescent and daft and realised that suicide is all sorts of things but one thing it isn’t is romantic.  In my defence, I can claim that what first turned me on to Plath was not anything to do with her reputation as a professional depressive but just these lines, reproduced in some piece of teenage fiction that I read:

(That this came from a longer poem entitled ‘Lesbos’ was a bonus for a sexual identity-wobbly 14 year old, but that’s not relevant just at the moment.)

And like others, I then went through the “identification with mad girl” phase (poet=heightened sensitivity=I Don’t Know Where I Belong But Wherever It Is It Isn’t Here=me!); to the impatient, oh-get-a-life phase (as the philosopher Jacqueline Rose said, on finishing her book on Plath: “I’m sick of mad girls”); and then finally on to a reluctant empathy that’s to do with the understanding, which comes to some of us over time, of what it’s like to feel betrayed and abandoned and voiceless. Plath was unusual in having the capacity to write about those experiences in a way that speaks to a broader sense of the human condition, over and above confessional self-indulgence.

Along with the sympathy I’ve struggled with the difficult fact that her act of self-destruction so bluntly involved her children, a few doors away and protected from the oven gas by towels; and yet some of us are also familiar with the level of stricken despair that takes you to a place from which your perspective on your own self, and on your children and what might really be best for them, becomes, for want of a better term, Martian.

I’ve no idea what Plath might or might not have gone on to do had she been found in time (as some evidence suggests she thought she would be) on the morning of 11 February 1963. What I hope endures of her is not the maudlin suicide artist stuff, nor the simplistic myth of the mentally unstable and therefore doomed woman, but respect for the clarity of vision and discipline that enabled her to transform painful and difficult experiences into words like these:

Nick and the Candlestick

I am a miner. The light burns blue.
Waxy stalactites
Drip and thicken, tears

Wrap me, raggy shawls,
Cold homicides.
They weld to me like plums.

Old cave of calcium
Icicles, old echoer.
Even the newts are white,

Those holy Joes.
And the fish, the fish -
Christ! they are panes of ice,

A vice of knives,
A piranha
Religion, drinking

Its first communion out of my live toes.
The candle
Gulps and recovers its small altitude,

Its yellows hearten.
O love, how did you get here?
O embryo

Remembering, even in sleep,
Your crossed position.
The blood blooms clean

In you, ruby.
The pain
You wake to is not yours.

Love, love,
I have hung our cave with roses,
With soft rugs –

The last of Victoriana.
Let the stars
Plummet to their dark address,

Let the mercuric
Atoms that cripple drip
Into the terrible well,

You are the one
Solid the spaces lean on, envious.
You are the baby in the barn. 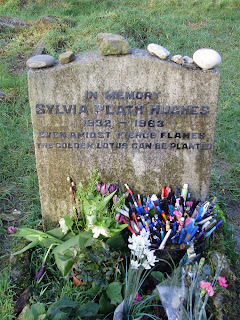 Posted by Tom Shakespeare at 5:26 PM