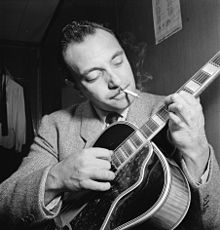 Disability is hardly incompatible with musical success, as deaf Beethoven or Evelyn Glennie,  and a myriad of blind classical, jazz and blues musicians can attest.  Several great musicians have had physical impairments, including reputedly Paganini with Marfan syndrome.  But Django Reinhardt was perhaps the best example of a musician who overcame a career-ending injury to achieve international distinction: along the way, he invented a whole new style of jazz guitar.

Jean Reinhardt was born in a Gypsy caravan in Belgium, the son of an itinerant musician and a dancer.  The nickname Django means “I awake” in the Romani language.  Reinhardt spent his youth in Roma encampments near to Paris.  He had minimal formal education, and nor did he join the family enterprise of furniture making.  Instead, he learned to play violin and banjo from an early age, and was making a living from music by the time he was 13.

When he was 18, Django Reinhardt was injured in a caravan fire,  which was caused by a knocked-over candle that ignited the paper and celluloid flowers that his first wife Bella made to sell.  The burns were so extensive that doctors wanted to amputate his left leg.   But Reinhardt discharged himself from hospital, taught himself to walk, and within a year was mobile with a stick. The fire also left Reinhardt’s left hand badly damaged: he was unable to bend the two smaller fingers, and he had limited function in the rest of the hand.  But Reinhardt learned to play the guitar again, using his thumb, index and middle fingers to pick out tunes, with the damaged fingers only used for chords.

During his convalescence, his wife left him, taking his baby son.  But the following years were a turning point for Reinhardt, as he first heard American jazz music on record, and he met Stephane Grappelli, a younger violinist.  With other musicians, they began to jam together and develop a new style based on stringed instruments.  In 1934, they were invited to play as the Quintette du Hot Club de France, in Paris.  Reinhardt's style has been described as "the clock that laughs", because of the combination of relentless beat and lightness.  Thanks to their increasing success, Reinhardt was able to play with many American jazz musicians who visited Paris, such as Coleman Hawkins.  He also married again, and had another son.

When war broke out, the Quintette were on tour in England, but Reinhardt returned to Paris.  Under the Nazi occupation, jazz had an ambiguous status: never formally banned, it was nevertheless persecuted as Negro music.  However, some Nazis enjoyed and supported jazz music.  Trying several times to escape France, Reinhardt knew he was in some danger because of his Romani heritage: the Nazis exterminated several hundred thousand European Romani people.

In 1946, Django Reinhardt toured the United States with Duke Ellington’s orchestra, taking six curtain calls when they played Carnegie Hall.  However, he never really did well in America, and returned to France in 1947, to continue collaborating with Grappelli and playing the jazz clubs of Paris.  Despite a somewhat unpredictable approach to performing - turning up late, with unpolished shoes, or disappearing to play billiards or go fishing - he recorded albums, and began to experiment with electric guitar.

In 1953, Django Reinhardt collapsed with a stroke, after walking home from the railway station after an evening playing in a Paris club.   Because it was a weekend, it took 24 hours before he got medical attention, and then he was found dead on arrival at the Fontainebleau hospital.

Since his untimely death, Django Reinhardt has gained legendary status in the world of music, despite only coming 66th  in the Flemish and 76th in the Walloon versions of The Greatest Belgian competition.   His own family have continued his musical tradition.  Reinhardt’s distinctive approach has influenced not just jazz, but also rock and country guitar players.  For example, Jerry Garcia of The Grateful Dead, who also damaged a finger in an accident, said of Django Reinhardt:

"His technique is awesome! Even today, nobody has really come to the state that he was playing at. As good as players are, they haven’t gotten to where he is. There’s a lot of guys that play fast and a lot of guys that play clean, and the guitar has come a long way as far as speed and clarity go, but nobody plays with the whole fullness of expression that Django has. I mean, the combination of incredible speed – all the speed you could possibly want – but also the thing of every note have a specific personality. You don’t hear it. I really haven’t heard it anywhere but with Django"

Trying to pin down that personality, I spoke to my friend the violinist and researcher Tom Ling, who still plays the tunes of the Hot Club de Paris: for him, the music of Django Reinhardt

Miles Kington talking about jazz under the Nazis
Posted by Tom Shakespeare at 2:08 PM