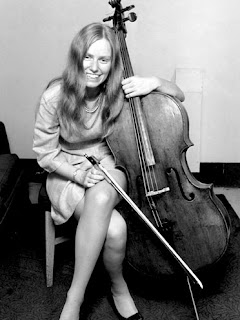 It is exactly 25 years since the death of the greatest ever English cellist, a player who will be forever associated with the Elgar Cello Concerto, and whose passion and directness struck all who heard or saw her.

Jacqueline du Pré grew up in Oxford.  Her father was an accountant, from a Channel Islands family, and her mother was a piano teacher.  At the age of four, Jackie heard a cello on the radio, and decided that she wanted to play one.  Her mother supported her early learning on the instrument.  Jackie said later: 'My mother was a tremendous inspiration. She guided my first steps, wrote tunes for me to play, and drew pictorial descriptions of the melodies. These were quite beautiful and I used to find them tucked under my pillow in the morning so that I couldn't wait to get my hands on the cello again every day. My mother also taught me composition.”

As a child, she went to the London Cello School, and then Guildhall School of Music, where she won the gold medal.  She gave her first concert at the Wigmore Hall aged 16, playing a donated Stradivarius.  She studied with famous cellists such as Paul Tortelier and Rostropovich, who saw her as the heir of his talent.  Jacqueline du Pré became famous for her performances of the Elgar Cello Concerto at the Proms (1963-1969), and for the recording she made of the piece with Sir John Barbirolli and the London Symphony Orchestra (1965).

At Christmas 1966 she met the pianist and conductor Daniel Barenboim.  The following year she converted to Judaism and they married in Jerusalem.  She played much chamber music with Barenboim, such as the Schubert Piano Quintet “The Trout”.  However, Jacqueline du Pré had little affection for more modern classical music.  Her recordings are justly famous, but not as extensive as her fans would have wished.

From 1971, Jackie’s playing began to decline, as she lost feeling in her fingers and strength in her arms.  Her last concerts came in February 1973, and in October 1973, she was diagnosed with multiple sclerosis, which she liked to call "multiple fuckosis".  She continued to teach: I have met one of her students, who talks of how they sometimes had to carry her wheelchair to overcome access barriers.  Jacqueline du Pré died on 19 October 1987, aged only 42.

The achievement of Jacqueline du Pre cannot but be overshadowed by the success of the film Hilary and Jackie, based on a memoir by her brother and sister, and telling the story of the months in 1971 when Jackie had an affair with Christopher Finzi, her sister’s husband.  The film paints Jackie as a manipulative person.  Hilary, a musician herself, wrote: "Nobody could be with Jackie for long without being reduced by her... People couldn't live with her week in, week out, because she unwittingly destroyed them."


In one sense, the film is a counter balance to the adulation of this remarkable musical talent.  The image of the tragic genius is a classic disability trope, and to hear about her bad behaviour makes Jackie seem more real.  Although, as Helen Meekosha points out, critics resorted to shallow disability stereotypes - the tortured genius - in their reviews of the film. Meekosha, who herself has MS, talks about the tragedy of dealing with a degenerating body, and the anger and frustration which is generated by impairment, not just by social barriers.  When identity and worldly success depends on exactly the fine motor control and sensitivity which MS destroys, the frustration must be even worse. 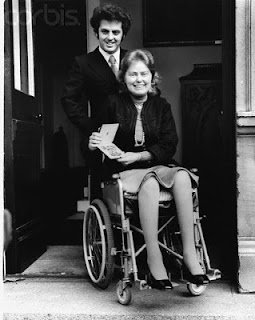 Those who knew Jacqueline du Pré well protest that the film portrays her wrongly.  Finzi was a serial adulterer, who had several illegitimate children, and a reputation as a “sexual therapist” for troubled people, in an era where “free love” was fashionable.  Hilary consented to her sister having the affair with him.

More to the point, Jackie was “a giver not a taker” according to her close friends and colleagues.  Documentary films by Christopher Nupen reveal her as full of “warmth, honesty and enthusiasm”, with a charisma which has become legendary.  Many suspect that jealousy underpins the negative representation of her by her siblings.  When Jacqueline du Pré died, she was surrounded by her friends, not by her relatives.

Posted by Tom Shakespeare at 1:13 PM