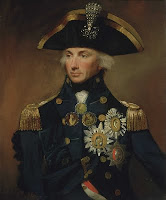 Who is the greatest British military leader of all time? Which disabled person prevented the invasion of England? Who was the most heroic naval commander in our history? The answer could only be Nelson, the man of contrasts: a man of high ideals, who abandoned his wife for a floozy; a person of supreme courage, who was also insecure and vulnerable. As his contemporary Lord Minto said, "He is in many points a great man, in others a baby."

Horatio Nelson - or Horace as he was known - was son of a country parson in Burnham Thorpe, Norfolk, one of five boy and five girls . From his father, he inherited or learned a strong sense of piety. He was a small and delicate child, but full of fire. He learned to sail in nearby Burnham Overy (as did I, with less success, two centuries later). His mother died when he was nine, and four years later Horace was off to sea as a midshipman, thanks to his Uncle Maurice Suckling, a naval hero and later a man of influence at the Admiralty. Typically, Nelson suffered chronic sea-sickness throughout his career.

His famous injuries mainly came on land, rather than at sea. In 1794, bombarding the French at Calvi, on Corsica, a cannon ball struck the bastion behind which he was standing, and a splinter resulted in an injury, probably a detached retina, which left him blind in his right eye. Towards the end of his life he wrote "A few years must, as I have always predicted, render me blind. I have often heard that blind people are cheerful, but I think I shall take it to heart."

Nelson's bravery and lust for glory was evident at the Battle of Cape St Vincent in 1797, when his 74 gun ship engaged with three much bigger Spanish ships. Nelson boarded the first, then leaped across to another ship, shouting "Westminster Abbey! Or, glorious victory!" and forcing their surrender. Later the same year, attacking the harbour of Santa Cruz on Tenerife, grapeshot shattered his right elbow, leading to an amputation. Nelson complained at the cold knife, recommending the surgeon in future to warm the blade first. Afterwards in despair, Nelson wrote to his commander, Admiral St Vincent with his unfamiliar left hand:

"I am become a burthen to my friends and useless to my country. When I leave your command I become dead to the world. I go home and am no more seen... I hope you will give me a frigate to convey the remains of my carcass to England... A left-handed admiral will never be considered as useful, therefore the sooner I get to a very humble cottage the better and make room for a better man to serve the state."

For a naval hero like Nelson to be so mutilated was unusual. While destitute and injured sailors were familiar sights begging in the streets of England, their social betters usually avoided the thick of the fighting. But not Nelson, who both led from the front, but also showed great concern for the well being of his men, and advocated for them to have state pensions.

Nelson's status as a national hero was confirmed by his brilliant victory over the French at Aboukir Bay in 1798 after Napoleon had landed his army in Egypt. By sailing his smaller vessels between the French line of battle and the shore, Nelson was able to achieve a devestating victory. All but two of the French ships of the line were destroyed, marooning Napoleon in North Africa. Needless to say, Nelson was wounded again, when a shot fragment gashed open his forehead. Refusing to take precedence in the queue for the surgeon, he exclaimed "No, I will take my turns with my brave fellows." Such gallantry appears typical of the time. For example, the French Admiral De Breys had his legs shot away during the battle. He ordered tourniquets to be tied round the stumps and sat in an armchair on deck commanding the action until another cannon shot tore him in two.

Back home, there was patriotic rejoicing at the British triumph. The First Lord of the Admiralty fainted when he received the news, while Nelson's grateful monarch awarded him a Barony. In Naples, where he had begun an affair with Lady Hamilton, the ambassador's wife, a great ball was held in Nelson's honour. Among his many awards and presents was a clockwork revolving diamond plume for his hat, sent by the Sultan of Turkey.

Yet a German described meeting Nelson at Dresden, on his way home overland with the Hamiltons, writing "One of the most insignificant-looking fellows I ever saw in my life. His weight cannot be more than seventy pounds, and a more miserable collection of bones and wizened frame I have never yet come across." But landing at Yarmouth, Nelson was heralded as the Norfolk hero, and much celebration continued back in London.

Private life was rather more difficult. His wife Fanny was anxious and solicitous, whereas his mistress Emma was gushing and admiring. The affair was a scandal, and the king publicly snubbed Lord Nelson at court. Fanny wrote to him "I am sick of hearing of dear Lady Hamilton, and am resolved that you shall either give up her or me". When a baby, Horatia, was born to Emma in 1801, Nelson finally split with Fanny, and went off on another naval expedition to the Baltic, perhaps partly to escape his domestic problems

It was at the resulting battle of Copenhagen, where he felt his commander was being too cautious, that Nelson famously ignored the signal to discontinue action. Nelson said to his colleague "You know, Foley, I have only one eye - I have a right to be blind sometimes." He mimed putting the telescope to the wrong eye, saying "I really do not see the signal". His bold disobedience again triumphed, as 17 out of 18 Danish ships were captured, burned or sunk.

It was in 1803, now as Vice Admiral Viscount Nelson, that he was appointed to command the Mediterranean fleet, tasked with resisting the combined French-Spanish fleet. Napoleon was seeking naval supremacy, in order to safely invade England with his army.

The final battle came on 21 October 1805, off Cape Trafalgar. Nelson's plan was again bold: to sail his 27 ships in two lines directly at the enemy fleet of 33 French and Spanish first-rates. Having composed his final prayer - "I commit my life to Him who made me" - Nelson went up to stand on the quarter deck in dress uniform, complete with his decorations and the diamond plume on his hat, an obvious target for snipers. When his old friend Captain Hardy suggested he change to a plain coat. Nelson responded "he was aware that he might be seen, but it was now too late to be shifting a coat".

Soon after combat was joined, Nelson was hit by snipers on the Redoubtable, exclaiming "They have done for me at last, Hardy. My backbone is shot through". Nelson was taken below, covering his face with a handkerchief so as not to demoralise his men. As he lay dying, Hardy came down to share the news of total victory. Two thirds of the enemy fleet destroyed or captured, and not one British ship lost. Nelson said "Now I am satisfied. Thank God I have done my duty". Famously, Hardy kissed him farewell as he died, Nelson's final thoughts being for his mistress and daughter.

Joy at the naval success of Trafalgar was mingled with grief throughout the fleet. One sailor wrote "chaps that fought like the Devil sit down and cry like a wench". Back in England, Coleridge noted "When Nelson died, it seemd as if no man was stranger to another: for all were made acquaintances in the rights of common anguish". It was an event like the assassination of J F Kennedy or the death of Princess Diana, which united the nation.

As an eighteen year old in 1775, languishing with malaria after a voyage to India, Nelson had resolved "Well then, I will be a hero, and confiding in providence, I will brave every danger." He alway had a passionate belief in his own destiny. Three decades later, he more than fulfilled his ambition, through his charisma, boldness and what became known as "The Nelson touch". Now every October 21, the British navy drinks a toast to "The Immortal Memory". Countless pubs in Norfolk are named for their hero, including in Nelson's home village of Burnham Thorpe, where my own father is buried. It seems noteworthy to me that two of Britain's most celebrated military commanders - Nelson and Churchill - were disabled people. As Nelson wrote in 1804, "I really believe that my shatter'd carcass is in the worst plight of the whole fleet".

Posted by Tom Shakespeare at 12:10 PM