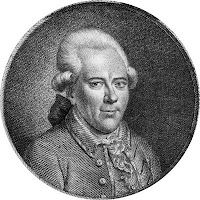 "To discover relationships and similarities between things that no one else sees. Wit can in this way lead to invention"

The aphorism is the one pleasure in life where less is always more. I have always liked this literary form, which R.J.Hollingdale tells us must be brief, must be isolated, must be witty, and must be philosophical. Although the aphorism has a central place in French thought - consider Pascal or La Rochefoucauld - my favourite aphorists are German: Friedrich Nietszsche, Karl Kraus, Walter Benjamin and Ludwig Wittgenstein. But the first place is reserved for the man who pioneered the aphorism in Germany, Georg Christoph Lichtenberg, who was also that country's first professor of experimental physics.

Born in Oberramstadt, the youngest of the seventeen offspring of a Lutheran clergyman, Lichtenberg was a weak and sickly child. He grew up with a malformation of the spine, perhaps due to tuberculosis, which made him a hunchback. He explained,

“My head lies at least a foot closer to my heart than is the case with other men: that is why I am so reasonable.”

During his life he had a multitude of real and imagined ailments, leading him to suggest:

"If Heaven should find it useful and necessary to produce a new edition of me and my life I would like to make a few not superfluous suggestions for this new edition chiefly concerning the design of the frontispiece and the way the work is laid out.”

Despite all this, he had many romances. His private life was unusual, and remarked on by his neighbours and contemporaries. For several years he lived with the teenage daughter of a weaver. After she died aged 18, he then took up with a washerwoman's daughter, with whom he had seven children, and whom he eventually married. But as he said

"Every man also has his moral backside, which he refrains from showing unless he has to and keeps covered as long as possible with the trousers of decorum"

Like another hunchbacked hero of mine, Antonio Gramsci, Lichtenberg jotted his thoughts into a series of notebooks, which he called "Waste Books":

"Tradesmen have their 'waste book' in which they enter from day to day everything they buy and sell, everything all mixed up without any order to it, from there it is transferred to the day-book, where everything appears in more systematic fashion ... This deserves to be imitated by scholars. First a book where I write down everything as I see it or as my thoughts put it before me, later this can be transcribed into another, where the materials are more distinguished and ordered."

However, Lichtenberg never published his approximately 4000 observations, of which perhaps the most famous is

"To err is human also in so far as the animals seldom or never err, or at least only the cleverest of them do so."

Nor did he create his own system of philosophy. However, his writing is perpetually stimulating and insightful. As Goethe said of him;

"We may use Lichtenberg's writings as the most wonderful dowsing rod: wherever he makes a joke, there a problem lies hidden."

One Lichtenberg aphorism, taken daily after breakfast, would be the dietary supplement I would prescribe to stimulate thought and ward off boredom.

Lichtenberg's career was spent as a mathematician and physicist at the University of Göttingen, where his lecture-demonstrations were immensely popular. I was delighted to learn that his students included Novalis, the German romantic poet immortalised by Penelope Fitzgerald in The Blue Flower. After teaching several young English aristocrats, Lichtenbeg was invited to visit Britain, after which he became an ardent Anglophile.

While in England, Lichtenberg became a great favourite of the King and Queen: it is said that on one occasion King George III (who was of course German himself), caused a great excitement by coming to Lichtenberg's lodging at 10am one morning and asking to see "Herr Professor" to continue their fascinating conversations.

In London, Lichtenberg marvelled at the acting of Garrick, and wrote a book which described Hogarth's engravings in meticulous detail. He shared Hogarth's fascination with people's behaviour and interactions: he has been described as a "spy on humanity."

Among his experiments, he noticed and described the electrostatic principle that would lead to the invention of the photocopier 150 years later. The great Alessandro Volta paid him a visit to discuss electricity in 1784. But although elected Fellow of the Royal Society, Lichtenberg made no significant scientific discoveries himself, writing:

"I would have given part of my life to know what the average height of the barometer was in Paradise."

Aside from his disability, and his writing, I relate to Georg Christoph because he was as much a procrastinator, as a polymath: he never got around to writing his novel either. His little asides often anticipate other people's advances - as when he considers whether blind people might read letters with their fingers. Typically, although he probably was the first conceiver of the hydrogen balloon, he never got around to trying it out. Perhaps his lasting impact on the world was his proposal of what is now the standard paper size system (A3, A4, A5 etc). His Aphorisms deserve to be more widely known:

"Let him who has two pairs of trousers turn one of them into cash and purchase this book."

Posted by Tom Shakespeare at 5:40 PM