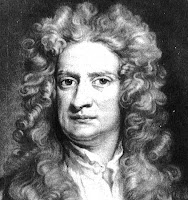 “I know not what I appear to the world, but to myself I seem to have been only like a boy playing on the sea-shore, and diverting myself in now and then finding a smoother pebble or a prettier shell, whilest the great ocean of truth lay all undiscovered before me.”

Born prematurely, and abandoned by his mother at the age of three, Isaac Newton’s childhood was unhappy, and he was described as idle and inattentive at school. But he had a passion for learning, and eventually in 1661 went to Trinity College Cambridge, intending to get a law degree. There he became interested in astrononomy, physics and then maths, entering his thoughts in a notebook entitled Certain Philosophical Questions, in which he also wrote “"Plato is my friend, Aristotle is my friend, but my best friend is truth".

When Cambridge University was closed because of the plague, he went back home to Lincolnshire, and spent two years reading books on mathematics, returning to become a Fellow in 1667. In 1669 he became Lucasian Professor of Mathematics, using his first lectures to demonstrate that white light was actually a mixture of the spectrum of colours. When he donated one of his new reflecting telescopes to the Royal Society, they elected him a Fellow. By 1666 he had developed the theory of universal gravitation: “... all matter attracts all other matter with a force proportional to the product of their masses and inversely proportional to the square of the distance between them.”

In 1687 Newton finally published The Mathematical Principles of Natural Philosophy, usually known as Principia Mathematica, which showed how his laws of motion explained the movements of the planets and other heavenly bodies. Berlinski writes “Nothing like the Principia had ever appeared before the seventeenth century; and in truth, nothing like the Principia has ever appeared afterward. In very large measure, it was the Principia that ignited the furious dark energies that brought mathematical physics into existence and that have sustained its fires for more than three hundred years.” Newton’s universe is mathematical, proceeding like a clock due to universal laws. Sadly, the story of the apple falling on his head is probably a myth.

Newton had a complex personality. He wanted fame, but feared criticism – which meant that often he avoided publishing his results. He was anxious and insecure. Aside from his mother, and the niece to whom he was guardian, he seems to have had no emotional connection with women. He had ferocious arguments with colleagues and rivals such as Hooke and Leibniz, accusing the latter of plagiarising his discovery of “fluxion” (which Leibniz named differential calculus). In Geneva, I was delighted to find, in the wonderful Bodmer Library, Leibntiz’s own copy of the Principia, heavily annotated. Newton’s assistant Whiston said that “ Newton was of the most fearful, cautious and suspicious temper that I ever knew”.

Deeply religious, Newton studied philosophy and theology and astrology as well as science. He devoted years of his life and many thousands of words to esoteric investigations into the philosopher’s stone, transmutation and the elixir of life. John Maynard Keynes described him as “the last of the magicians”, and as someone who “regarded the universe as a cryptogram set by the Almighty”. Newton was particularly interested in the form and dimensions of Solomon’s Temple, as described in the Bible, and also tried to reconcile classical mythology with the Biblical account. A staunch, if unorthodox, Protestant, he had opposed James II and welcomed the victory of William of Orange. He represented Cambridge University in the Parliament of 1689.

In 1678, Newton had a nervous breakdown, and avoided mixing with other people. In 1693, after the death of his mother, he had a second breakdown, during which he sent wild accusatory letters to his friends John Locke and Samuel Pepys. From then on, he retired from research. In 1696, he moved to London to work for the Royal Mint, becoming Master in 1699, in particular pursuing counterfeiters with his characteristic rage. In 1703 he was elected President of the Royal Society. As he got older, he became fatter and more languid, surrounding himself with bright young men who edited new editions of his work, but speaking very little in public. Probably the greatest of British scientists, he was the first to be knighted, and the first to be buried in Westminster Abbey. But his most famous quotations show his humility: in a letter to Robert Hooke he wrote: “If I have been able to see further, it was only because I stood on the shoulders of giants”:

Isaac Newton is claimed on various different lists of people with disabilities as having epilepsy, a stutter, or some sort of mental illness – depression, bipolar disorder or perhaps Asperger’s Syndrome. He was certainly a solitary individual, with a great capacity for sustained concentration, and a brilliantly intuitive mind. Rather obsessive, he risked blindness by staring at the sun reflected in a looking glass, and at one point inserted a bodkin (needle) into his eye socket, between eyeball and bone. Although there is considerable debate over the nature of his health problems, a contribution to his personality could be mercury poisoning, caused by his chemical research, which can cause hyperactivity, insomnia and irritability, all of which were characteristic of him.

Posted by Tom Shakespeare at 3:26 PM