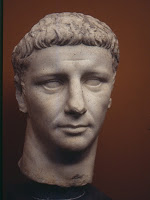 Claudius came from a dysfunctional family, was born with a physical impairment, and grew up somewhat unstable. He overcame his early disadvantages to make a surprisingly successful Emperor, and was arguably one of the most important disabled people in British history.

Tiberius Claudius Drusus was born in Lugdunum (now Lyon), son of a noted Roman military leader and grandson of Mark Anthony. He was the first Roman emperor to be born outside Italy. Sources suggest he was born prematurely: his mother Antonia described him as a “monster of a man, not completed by Dame Nature, but only begun”. His disability has been identified, convincingly to me, as cerebral palsy, although polio and Tourette syndrome have also been suggested. At any rate, his family found him shameful, he was hidden from popular view for much of his youth, and had a guardian even after attaining manhood. In The Problem of Claudius, a dissertation which I first encountered when I was writing my own thesis, Thomas De Coursey Ruth wrote that

“Misunderstood, treated by his own family with cruelty and contempt, constantly made conscious of his imperfections, unable because of his physical weakness and disabilities to assert himself, left a great part of the time to the care of freedmen, or servants, he must have acquired in childhood a feeling of inferiority and of inability to adapt himself to his proper environment.” (1916, 136).

Claudius is described as having problems walking and was therefore carried everywhere in a sedan chair; he had tremor of the hands and head and dribbled; and he had a speech impediment. Initially despising him, his forebear Emperor Augustus later revised his opinion when he heard him giving a formal oration, writing in a letter: “for how anyone who speaks so confusedly in conversation can speak so clearly what he has to say when he declaims I do not see”. He also noted “in matters of importance, when his mind does not get off the subject, the really fine quality of his intellect is apparent”.

Barred from a public career under the reigns of Augustus and Tiberius, Claudius retired to a private life of scholarship and over indulgence. A dry and pedantic writer, he produced a number of historical works, and was the last man known to have been able to read Etruscan.

Claudius was the only male member of the royal family to survive the reigns of Tiberius and Caligula, who made him the butt of cruel jokes. Later, Claudius explained that he had pretended to be stupid in order to avoid being assassinated as a potential political rival. After the cruel, probably insane, Caligula was killed by his bodyguard, Claudius was made emperor by the Army, and from henceforth all Roman emperors depended on the army for their power. He took the name Caesar, which now became an official title rather than a surname (Tsar, Kaiser and probably Shah all being later derivations).

But this violent start did not stop Claudius having many successes as emperor. He was an able administrator, reforming the senate and the courts, and building roads, aqueducts and canals, as well as the port of Ostia. He issued up to 20 edicts a day, some of which are evidence of his whimsical and sometimes undignified sense of humour, for example the one on how to cure snake bites and another advocating public flatulence to promote good health. He also wrote a treatise on dice playing.

Liable to make jokes at inappropriate moments, Roman sources claim that Claudius lacked tact and dignity and was too fond of slang. In this, he seems to anticipate Silvio Berlusconi or perhaps Nicholas Sarkozy. Suetonius notes that “in hearing and deciding cases Claudius showed strange inconsistency of temper, for he was now careful and shrewd, sometimes inconsiderate and hasty, and occasionally silly and like a crazy man.” From contemporary accounts, it sounds as if he tended to get over excited, and could be rather naïve in his public pronouncements.

According to the inscription on his triumphal arch, Claudius “was the first to bring barbarian peoples from across the Ocean under the sway of the Roman people”, in other words he led the Roman conquest of Britain in AD43, seizing the capital, Colchester, with the aid of the first elephants to be seen in England.

Claudius was less successful in his private life. Unusual among Roman emperors in being resolutely heterosexual, he was married four times. He was unlucky enough to chose as his third wife the notoriously unfaithful Messalina, and to follow her by marrying his niece Agrippina, who is said to have poisoned him. Timid and trusting, he was vulnerable to the lures of manipulative women as well as to the freedmen who made up his inner circle. Both groups exploited his fears of assassination to get rid of people they did not like.

While Claudius was not vicious like Tiberius or Nero, whom he disastrously chose to succeed him, he did take a morbid delight in witnessing suffering, for example torture, executions and in particular the gladiatorial games. During his reign, 35 senators and 300 knights were executed, although admittedly many of them had conspired against him.

However, Claudius was also generous, loyal and considerate to his friends, and open to people of all classes. Caratacus, the leader of the British resistance to the Romans, was brought to Rome in chains in 51 AD and paraded through the streets. Giving a dignified speech, Caratacus told Claudius that if he was to pardon him, it would be an everlasting memorial to his clemency: which he did, and it was.

To conclude, I find Claudius a complex and interesting character, and not just because he was so successfully ventriloquized by Robert Graves. He was one of the most powerful disabled people in history. His cruelty was typical of ancient Rome, and at least he was not as mad or bad as most other leaders of the time. Intelligent, absent minded and extremely fond of good food and drink, he would probably have fitted in well at an Oxbridge High Table, where he would no doubt have bored his companions with his unsuccessful plan to add three new letters to the Roman alphabet.

Posted by Tom Shakespeare at 5:53 PM