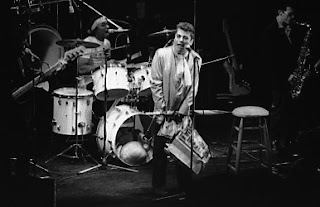 There’s been no shortage of disabled popular musicians (Ray Charles, Stevie Wonder, Gene Vincent), and even a good sprinkling of polio-survivor musicians (Judy Collins, Donovan, Joni Mitchell, Neil Young), but no other mainstream-successful singer-songwriter has ever explored disability and attitudes to disabled people as powerfully and memorably as Ian Dury.

Ian Dury was born in Harrow, son of a bus driver and a health visitor.  After the war, the family briefly lived in Switzerland, where his father was working as a chauffeur.   When the relationship broke down, Dury’s mother Peggy came back to England with her son and lived with her sister, a doctor.  Aged 7, Dury contracted polio, he believed from the Southend swimming baths: this was during the 1949 epidemic when the virus was rife and there was no vaccine.  The newly disabled child was to spend eighteen months in hospital, much of it immobilized in plaster, and then, braced with a caliper, spent most of his teenage years at Chailey Heritage Craft School in Sussex.

This residential institution had the explicit intention of toughening up disabled children to prepare the rigours of the outside world.  As well as the cruelty there was also, Dury reported, quite a few “pervs” on the staff.  Writing about polio and music, George McKay has suggested that the enforced isolation and immobility which young people experienced with the disease may have shaped their creative persona, through solitary introspection, as well as their emotional lives.   Dury later said:

“Being in that place is one of the reasons I talk the way I talk. Before that I talked not quite BBC. A third of the kids there were funny in the head as well as being disabled . . . The situation was that from within you got very strong, but also you got coarsened . . . There was a lot of behaviour that just don’t happen in the outside world. Later you pretend to be arty about it but when I was there, I was just there, it was real. Thinkin’ about it now, I realise it was fuckin’ heavy. It was like a hospital in one way, like a school in another way, and like a prison in another way.”

Because he was academic, Dury’s family managed to get him entry to the Royal Grammar School in High Wycombe, where he received further rough treatment because of his disability.  He passed O Levels in English Language and Literature and Art, and went to first Walthamstow Art College and then the Royal College of Art, where he studied under the pop artist Peter Blake.  His paintings of this time concentrate on gangsters or the female nude ("I was very interested in Trilby hats and tits").  Some were exhibited during summer 2013.   While Dury was subsequently to teach art at Canterbury College of Art, he decided that his talents lay elsewhere.  So instead, he recruited several of his students into his first rock band, Kilburn and the High Roads, which started gigging in 1971.

This first musical outing was a good pub band, as well as being a bunch of misfits and freaks who attracted attention for their look as well as their music.  But it was with his second band, the Blockheads, signed in 1977, that Ian Dury became a major British pop star.  His Stiff Records releases such as “What A Waste”, “Wake Up, And Make Love with Me”, “Hit Me With Your Rhythm Stick” and “Sex and Drugs and Rock and Roll” and albums such as New Boots and Panties!! topped the charts during the 1980s.  Dury’s gravelly delivery, the tunes of Chaz Jankel, and the punk/funk style were all part of the success, but the major factor must have been the wit and poignancy of Dury’s lyrics, a cut above almost all his contemporaries, except Elvis Costello.  He wrote and sang about ordinary English working class lives.  As Robin Denselow said in his obituary, Dury was

“one of few true originals of the English music scene, the only man to successfully combine the energy and excitement of rock 'n' roll and funk with the bawdy humour, wit and home-spun philosophy of music-hall and of his native Essex.”

From the start, disability was part of the story.  Dury faced opposition when he wanted to become a performer, and even when successful, record labels were adverse to him making his disability explicit, but he overruled them, as with his decision to appear in the 1979 “Rhythm Stick” video with his withered arm exposed.  The song “Dance of the Screamers” was about the rigours of physiotherapy. Dury explained: “It was called the screaming ward and you could hear people screaming on the way there, and it was you when you was there, and you could hear the others on the way back.”
Another song went:

Hey, hey, take me away
I hate waking up in this place
There’s nutters in here who whistle and cheer
When they’re watching a one-legged race
And a one-legged prefect gets me in bed
Makes me play with his dick
One-legged horn and he’s shouting the odds
Driving me bloody well sick.

Perhaps the most memorable example of Dury's engagement with disability politics came in 1981, the International Year of the Disabled.  This was a turning point in the history of the disability movement, with disabled activists walking out of Rehabilitation International to form Disabled People’s International.    Dury despised those patronizing attitudes too:

The Year of Our Disabled Lord 1981 I was getting lots of requests. I turned them all down. We had this thing called the ‘polio folio’, and we used to put them in there . . . Instead I wrote this tune called ‘Spasticus Autisticus’. I said, I’m going to put a band down the road for the year of the disabled; I’ll be Spastic and they can be the Autistics. I have [my band named the] Blockheads and that means they’re autistic anyway. And my mate goes, ‘No – Spasticus Autisticus, the [rebel] slave’. Great, I’m Spartacus. So I wrote this tune . . . [I]t wasn’t allowed to be played anywhere and people got offended by it – everybody except the spastics.

The resulting song included lyrics such as:

I widdle
when I piddle
’cos my middle
is a riddle ...

I’m knobbled
on the cobbles
‘cos I hobble
when I wobble.

At the time, the song was banned by the BBC, but twenty years later it was to be part of the opening ceremony of the London 2012 Paralympics.

Dury was to have some success as an actor, with roles in films, TV and stage plays, and he also wrote a musical, Apples, staged at The Royal Court.  He turned down the opportunity to write the libretto of Cats, because, as he said, "Andrew Lloyd Webber is a w*nker”, thus saving his own credibility but losing out on millions.

Dury spoke out for Safe Sex, at the beginning of the AIDS epidemic, and during the 1990s, he served as a UNICEF Peace Ambassador.  However, he never became closely involved with the disability movement, and always aimed at the mainstream.  In the mid1990s, I remember filming a disability cabaret for Channel 4 in a London pub with various other disabled performers, with Ian Dury as part of the line-up.  Although he was friendly, he also appeared a bit bemused by the situation, and remained on the sidelines with a couple of his mates for most of the recording.

In 1996, Dury was diagnosed with colorectal cancer.  He died in March 2000, weeks after a final performance in aid of Cancer Backup.  Since his death, the reputation of this well-loved, acerbic, stubborn, difficult, singer-songwriter has, if anything, grown.  He was the subject of a biopic, and his songs were used as the basis for a play, Reasons to be Cheerful, by the Graeae Theatre company.  I think Dury differs from much of the modern disability movement because of his uncompromising willingness to name impairment for what it is.  He nails patronizing attitudes, but he also turns his unblinking eye on the difficulties and drawbacks of being a cripple.  And above all, he does it with humour.