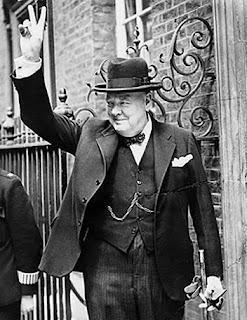 “Only a man who knew what it was to discern a gleam of hope in a hopeless situation, whose courage was beyond reason, and whose aggressive spirit burned at its fiercest when he was hemmed in and surrounded by enemies, could have given emotional reality to the words of defiance which rallied and sustained us in the menacing summer of 1940” (Anthony Storr)

Winston Churchill was born prematurely and looked after by a wet-nurse, as was the aristocratic way in 1874. Throughout his childhood, he endured a continuing lack of unconditional love and affection from both his parents which, according to the psychiatrist Anthony Storr, left Churchill psychologically ill-equipped. His salvation was his nanny, Mrs Everest, on whose death he described as “my dearest and most intimate friend during the whole of the twenty years I had lived”. However, it seems likely that Churchill also had an underlying genetic disposition towards depression which, interacting with inadequate parenting, resulted in his mental health vulnerabilities. Indeed, his great ancestor the Duke of Marlborough shared his depressive tendencies, as did his own father, Randolph Churchill.

As a child, Churchill was not very impressive: small, thin and with a slight speech impediment, he was bullied at school. In 1893, he wrote from Sandhurst “I am cursed with so feeble a body that I can scarcely support the fatigues of the day; but I suppose I shall get stronger during my stay here.” However, he was determined to be tough, and had no lack of physical courage, having exerted willpower to overcome his fears. He was positively reckless in combat during the Boer War and the First World War.

Churchill was also hugely ambitious: writing from India in 1899, he said “What an awful thing it will be if I don’t come off. It will break my heart for I have nothing else but ambition to cling to…” Storr suggests that he sought recognition as a way of staving off despair. As Churchill said later “We are all worms. But I do believe I am a glow worm”. He had a strong sense that he was being kept for some higher purpose, the cause that finally presented itself when he was sixty-five and his country and the world was in such danger from fascism.

Churchill's energy and stamina are legendary.  When Churchill came back into Government at the outbreak of World War Two, it was my grandfather, then Parliamentary Secretary to the Admiralty, who welcomed him as First Lord of the Admiralty and made the introductions to colleagues on Sunday 3 September 1939.  In his memoirs, he wrote about the gruelling hours which Churchill kept:

"After a gruelling day's work Churchill became more light-hearted as midnight approached.  He threw off fatigue like a garment and relaxed.  I can see him now in my mind's eye dictating a speech, wearing an old pair of bedroom slippers and padding up and down his room like a caged lion, hands behind his back, head bent forward. A cigar always protruded from his mouth and through thick clouds of smoke he hissed scintillating sentences at the silent typewriter.  He had no prepared notes; he had not even jotted down headlines on the order of his speech.  All those distinguished phrases which characterise his speeches came out fashioned spontaneously in the furnace of his imagination...for two or three hours he dictated thus without a break.  If he finished by two a.m. he was more wide awake than ever.  We vainly suggested it was time for bed.  He usually had other ideas.  "What about a visit to the war room?"  He loved looking at the flags denoting the position of our warships on the oceans of the world."

CP Snow described Churchill as having a strong sense of insight, or intuition, rather than relying on insight. This approach sometimes led him astray, as with the disastrous Dardenelles campaign in the First World War (in which my grandfather fought, and nearly died). But his instincts about Hitler and about Stalin eventually proved to be correct. His brilliance was not that of a thorough or rigorous thinker. Famously, he preferred to have ideas presented to him on half a side of paper, because that was how he himself worked. He could also be very insensitive to the feelings of others, such as the assistants who had to keep him company through the night, and who were not able to take an hour's sleep after lunch or before dinner, as he usually did.

Churchill’s doctor, Lord Moran, records the Prime Minister in 1944, talking about his depressive tendencies: “I don’t like standing near the edge of a platform when an express train is passing through. I like to stand right back and if possible to get a pillar between me and the train. I don’t like to stand by the side of a ship and look down into the water. A second’s action would end everything. A few drops of desperation.” Yet after the Dardenelles, and in his wilderness years, he may have been deeply depressed, but he was not suicidal. He devised ways of keeping himself going – writing, painting, even bricklaying at his country house at Chartwell.

In his final years, Churchill suffered a recurrence of despair and a sense of his life having been futility, despite all he had achieved for himself and for his country. Hardening of the arteries and possibly Alzheimer’s disease may have contributed. His daughter records him as saying late in life “I have achieved a great deal to achieve nothing in the end”. Storr suggests that, as a result of a lack of parental affection, “he had a void at the heart of his being which no achievement or honour could ever completely fill”.

I am not sure how much I like, as opposed to admire, Churchill. His achievements in diverse fields were extraordinary, even though he hardly deserved the Nobel Prize for Literature: I have an early memory of my grandfather reading to me out of his History of the English Speaking Peoples.  Churchill started his career as a Liberal, but was more right wing than this might imply. He was a vigorous advocate of eugenics in the first decades of the twentieth century; he was a supporter of Edward VIII (and Mussolini, at the beginning); he opposed Indian Home Rule and should be assigned some of the blame for the Bengal famine of 1943; he was ultimately responsible for the saturation bombing of German cities in the first half of 1945; his post war term as Prime Minister was not distinguished. Yet despite this and other failures, he was a larger than life man, of ferocious appetites, powerful personality and immense inner drive. Small wonder that he topped a BBC Poll of “One Hundred Greatest Britons” in 2002: to many people, he was not only correct in describing the Second World War as “our finest hour”, he was also the architect of Allied victory. With his recurrent depression, his speech impediment, not to mention the physical and mental decline of his last years, Winston Churchill can also be counted, unquestionably, as a person with disability.