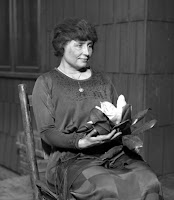 "The public must learn that the blind man is neither genius nor a freak nor an idiot. He has a mind that can be educated, a hand which can be trained, ambitions which it is right for him to strive to realise, and it is the duty of the public to help him make the best of himself so that he can win light through work."

For a long time, I avoided learning more about Helen Keller, one of the most famous disabled people of all time, deterred by the over-sentimentalized depictions of her, and in particular the influence of her first teacher, Anne Sullivan, such as in the film The Miracle Worker. However, I was wrong, because Keller was a truly remarkable human being, and far more interesting than she at first appears.

Helen Keller was born in Tuscumbia, Alabama. Her father and other relatives had served in the Civil War (curiously, one of her Swiss ancestors was the first teacher of Deaf people in Zurich). As a toddler, she fell seriously ill, possibly with meningitis: although she survived, she was left blind and deaf. As a child, she was very difficult, with ferocious temper tantrums and a habit of eating with her hands. She did have about 60 basic signs so she could communicate some needs.

Her mother had read about deafblind education in Charles Dickens' American Notes, and sought out help. It was Alexander Graham Bell (inventor of the telephone and passionate about deaf education) who put the family in touch with the Perkins Institution in Massachusetts. They recommended a 20 year old former pupil, Anne Sullivan, who herself was nearly blind, an interesting aspect of the story which I had not known.

Sullivan arrived in March 1887, and began trying to teach Keller to use finger spelling, as well as to behave in a more acceptable way. As Helen later wrote:

"We walked down the path to the well-house, attracted by the fragrance of the honey-suckle with which it was covered. Someone was drawing water and my teacher placed my hand under the spout. As the cool stream gushed over one hand she spelled into the other the word water, first slowly, then rapidly. I stood still, my whole attention fixed upon the motions of her fingers. Suddenly I felt a misty consciousness as of something forgotten, a thrill of returning thought, and somehow the mystery of language was revealed to me."

After the breakthrough, Helen had an insatiable demand for the names of everything, and rapidly expanded her vocabulary and ability to communicate. Eventually, she could understand what other people said by feeling their lips with her fingers, as well as using Braille. However, she never achieved her ambition of speaking clearly.

Soon, Helen Keller became nationally famous, meeting the President of the United States at the White House, and in 1900, enrolling at Radcliffe College, where she became the first deafblind person to graduate with a Bachelor of Arts degree in June 1904. From then on, she and Anne Sullivan toured the country – and later the world – earning a living by giving lectures. Keller’s speech remained limited, so her words had to be relayed by Sullivan. When the market for lectures dwindled, the pair of them performed the water pump breakthrough moment in vaudeville shows, earning up to $2000 per week. She was an active fundraiser for the American Foundation for the Blind.

Whereas her first books, The Story of My Life (1903) and The World I Live In (1908) revolved around her disability, her third, Out of the Dark (1913), discussed politics. Since 1909 she had been a member of the Socialist Party, influenced by Sullivan’s husband John Macy. It is often forgotten that Helen Keller was an advocate of workers’ rights, women’s suffrage, peace, birth control and other radical causes. In 1912, she joined the Industrial Workers of the World (The Wobblies). In 1920, she helped found the American Civil Liberties Union. Journalists who had once praised her courage and intelligence now criticised her for her political views. The editor of the Brooklyn Eagle wrote that her “mistakes sprung out of the manifest limitations of her development”.

“At that time the compliments he paid me were so generous that I blush to remember them. But now that I have come out for socialism he reminds me and the public that I am blind and deaf and especially liable to error. I must have shrunk in intelligence during the years since I met him.”

She demanded that the newspaper “fight fair”:

“Let it attack my ideas and oppose the aims and arguments of Socialism. It is not fair fighting or good argument to remind me and others that I cannot see or hear. I can read. I can read all the socialist books I have time for in English, German and French. If the editor of the Brooklyn Eagle should read some of them, he might be a wiser man and make a better newspaper.”

Helen Keller’s friends included Alexander Graham Bell, Charlie Chaplin and Mark Twain. After nearly fifty years as teacher, governess and companion Anne Sullivan died in 1936. Her successor as Helen’s interpreter and assistant was Polly Thomson. Together, Keller and Thomson toured the world, raising money for the American Foundation for the Overseas Blind.

A film about Keller, The Unconquered, won the Academy Award as best full length documentary. In 1962, a feature film was made of The Miracle Worker, originally a Broadway show, winning Oscars for the actresses playing Keller and Sullivan. In 1964, President Johnson awarded Helen Keller the Presidential Medal of Freedom. Four years later, Keller died in her sleep: her funeral was held at the National Cathedral in Washington. One of the first global disabled figures, her name is universally associated with disability: she is the epitome of the ever-fascinating "triumph over tragedy" trope. Even films like Children of a Lesser God and Sanjay Bhansali's Black, which never mention Keller, echo her personality. A pioneering example of what disabled people can achieve, Helen Keller has become a legend.

Posted by Tom Shakespeare at 9:43 AM